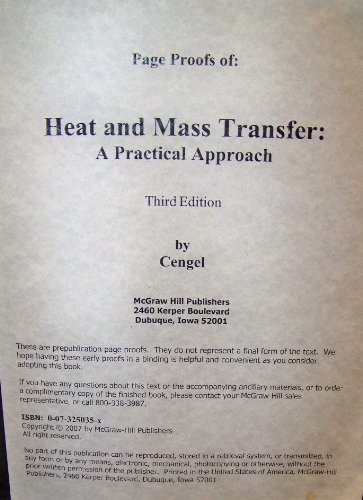 With complete coverage of the basic principles of heat transfer and a broad range of applications in a flexible format, Heat and Mass Transfer: A Practical Approach provides the perfect blend of fundamentals and applications. The text provides a highly intuitive and practical understanding of the material by emphasizing the physics and the underlying physical phenomena involved.Key: Text covers the standard topics of heat transfer with an emphasis on physics and real-world every day applications, while de-emphasizing the intimidating heavy mathematical aspects. This approach is designed to take advantage of students' intuition, making the learning process easier and more engaging.Key: The new edition will add helpful web-links for students.Key: 50% of the Homework Problems including design, computer, essay, lab-type, and FE problems are new or revised to this edition. Using a reader-friendly approach and a conversational writing style, the book is self-instructive and entertains while it teaches. It shows that highly technical matter can be communicated effectively in a simple yet precise language.

Yunus A. ï¿engel   is Professor Emeritus of Mechanical Engineering at the University of Nevada, Reno. He received his B.S. in mechanical engineering from Istanbul Technical University and his M.S. and Ph.D. in mechanical engineering from North Carolina State University. His areas of interest are renewable energy, energy efficiency, energy policies, heat transfer enhancement, and engineering education. He served as the director of the Industrial Assessment Center (IAC) at the University of Nevada, Reno, from 1996 to 2000. He has led teams of engineering students to numerous manufacturing facilities in Northern Nevada and California to perform industrial assessments, and has prepared energy conservation, waste minimization, and productivity enhancement reports for them. He has also served as an advisor for various government organizations and corporations.  Dr. ï¿engel is also the author or coauthor of the widely adopted textbooks   Differential Equations for Engineers and Scientists   (2013),   Fundamentals of Thermal-Fluid Sciences   (5th ed., 2017),   Fluid Mechanics: Fundamentals and Applications   (4th ed., 2018),   Thermodynamics: An Engineering Approach   (9th ed., 2019), and   Heat and Mass Transfer: Fundamentals and Applications   (6th ed., 2020), and all published by McGraw-Hill Education. Some of his textbooks have been translated into Chinese (Long and Short Forms), Japanese, Korean, Spanish, French, Portuguese, Italian, Turkish, Greek, Tai, and Basq.  Dr. ï¿engel is the recipient of several outstanding teacher awards, and he has received the ASEE Meriam/Wiley Distinguished Author Award for excellence in authorship in 1992 and again in 2000. Dr. ï¿engel is a registered Professional Engineer in the State of Nevada, and is a member of the American Society of Mechanical Engineers (ASME) and the American Society for Engineering Education (ASEE).

16 Heating and Cooling of Buildings

17 Refrigeration and Freezing of Foods