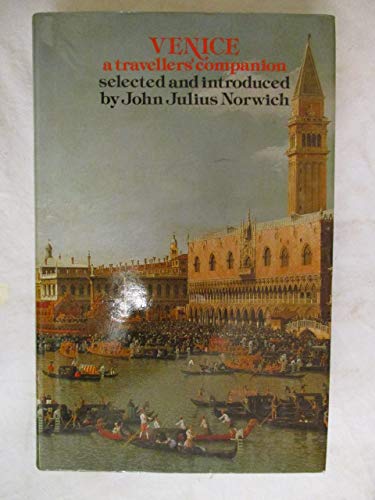 Venice of the sixth century, when lagoon-dwellers lived "like sea-birds" in huts built on heaps of osiers, was the city of the Doges, where people were inspired by the glories of Byzantium as they built it. Thirteenth century Venice was a world power holding "the gorgeous East in fee" and 15th and 16th century Venice was the city where Titian and Tintoretto and Veronese were at work. Venice of the 18th century was a city for revellers and in the 19th century it was a city for art lovers - each of these periods in its history is portrayed as its inhabitants and visitors saw it, through their eyes and in their voices. John Julius Norwich, in this latest of the "Travellers' Companion" series, has produced an anthology from the writings of James, Disraeli, Mark Twain and John Evelyn, among many others. This book may provide the tourist or armchair traveller alike with a flavour of the spirit of Venice.

John Julius, 2nd Viscount Norwich, was born on 15 September 1929, the son of the statesman and diplomat Alfred Duff Cooper (1st Viscount) and the Lady Diana Cooper. He was educated at Upper Canada College, Toronto, at Eton, at the University of Strasbourg and on the lower deck of the Royal Navy before taking a degree in French and Russian at New College, Oxford. He then spent twelve years in H.M. Foreign Service, with posts at the Embassies in Belgrade and Beirut and at the Disarmament Conference in Geneva. In 1964 he resigned to become a writer.

Descrizione libro Constable, 1990. Hardcover. Condizione: Used; Good. **Simply Brit** Shipped with Premium postal service within 24 hours from the UK with impressive delivery time. We have dispatched from our book depository; items of good condition to over ten million satisfied customers worldwide. We are committed to providing you with reliable and efficient service at all times. Codice articolo 2751098