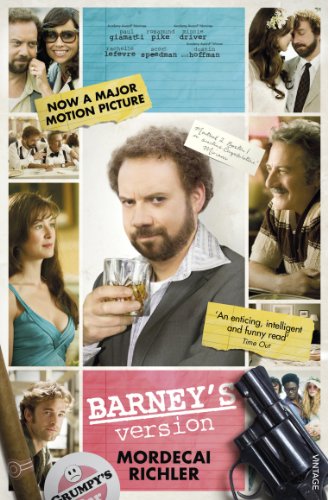 Even Barney Panofsky's friends tend to agree that he is 'a wife-abuser, an intellectual fraud, a purveyor of pap, a drunk with a penchant for violence and probably a murderer'. But when Barney's sworn enemy threatens to publish this damning verdict, Barney is driven to write his own memoirs, rewinding the spool of his life, editing, selecting and plagiarising, as his memory plays tricks on him - and on the reader. Barney slides from crisis to success, from lowlife to highlife in Montreal, Paris and London, his exploits culminating in a final outrageous scandal.

"Barney's Version belongs in the very front ranks of Jewish comic novels, a crowded field to begin with...Barney's Version is a rambling social satire, a breathless romp through the second half of the 20th century, and finally the celebration of a complicated and sensual life that is, if not well-lived, then certainly lived to the fullest" (Washington Post)

"The funniest book of the year, and maybe the saddest...Mordecai Richler never [wrote] with greater voice or more puckish verve. Barney Panofsky is his mouthpiece, truth, lies and lousy memory are his aces, every card in the deck is a picture, every rasp shoots an arc of grievance: bile with style... You will love it, laugh with it, and treasure it" (Scotland on Sunday)

"A delightfully curmudgeonly mock memoir, describing the life of one Barney Panofsky, a boozy Montreal Jew, from Paris atelier-bound aspirant to writer circa 1950 to present...An enticing, intelligent and bloody funny non-PC read" (Time Out)

"The novel is richly comic until its tragic end, when what has been a largely between-the-lines wisdom moves to the centre stage of a story that is ultimately about ageing and mortality" (Sunday Times)

"The narrator of Richler's new novel is as much a figure of satire as a satirist. He is a complex, endearing, at times plain frightening old reprobate and one of Richler's finest creations... Richler is magiserially in command of his material" (Kate Emck Guardian)

The hilarious, devious and touching story of an unruly life - a wonderful novel made into a motion picture starring Paul Giamatti and Dustin Hoffman.