Articoli correlati a The Modern World System III: The Second Era of Great... 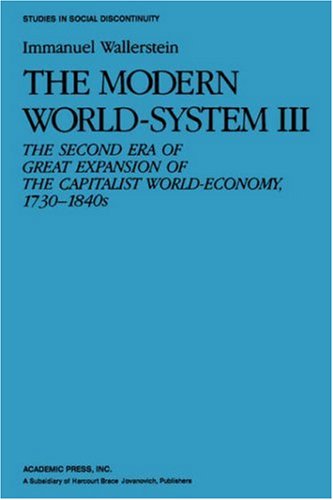 "This is a work in the grand historical tradition. It is bold in its thrust. From the first chapter, in which Wallerstein debunks a variety of pet explanations for the Industrial Revolution in Britain in the late eighteenth century, to the closing chapter, in which he depicts the emergence of the United States as part of the core of the capatalist world economy, many readers will find this a contentious and unsettling work. But it is contentious and unsettling in ways healthful for the normal practices of economic historians."
--THE JOURNAL OF ECONOMIC HISTORY
"Volume 3 is the latest and my favorite thus far of The Modern World-System, in which Immanuel Wallerstein plans to cover world-system developments between the 16th century and tomorrow.... Wallerstein has now found a clear voice, doing what he does best, namely, to untangle the debate lines of other scholars, to make their (often ideological) premises explicit, and to test their logic--both internally for consistency and externally by reference to the facts."
--AMERICAN JOURNAL OF SOCIOLOGY
"This third installment to Wallerstein's emergent world-systems theory is a welcome event....The project constitutes a formidable enterprise in empirical-theoretical analysis relative to the fashioning of a global order.... Recommended for graduate students and scholars. A must read for anyone interested in the whole globalization debate now gathering steam among social scientists and humanities scholars, including theologians."
--RELIGIOUS STUDIES REVIEW
"It has now been fifteen years since Immanuel Wallerstein published The Modern World-System I). No other book has had more of an impact on the social sciences in that time.... All of the strengths of his earlier work--the detailed and perceptive discussions of major historical debates, the long footnotes elaborating interesting tangential issues and providing wonderful quotations, and the immense bibliography--are here in spades. These features make the book a pleasure to read."
--STUDIES IN COMPARATIVE INT'L DEVELOPMENT
From the Reviews of Previous Volumes:
"...one of the important books of the year....all are sure to agree that Wallerstein has written a most impressive book."
--THE NEW YORK TIMES BOOK REVIEW
"This is an exciting and highly intelligent book...Wallerstein has produced a splendid stimulant to our historical imagination, and deserves a wide readership."
--HISTORY
"This, the third volume of Wallerstein's grand history of modern capitalism, maintains the by now well-known characteristics of the other two: it is extremely well written, brilliantly argued, splendidly backed by sources and quotations--all in the defence of positions which are largely untenable...This is a major contribution to world historical literature, painted on a broad canvas with much fine detail..."
--Sidney Pollard of Bielefeld University in THE ECONOMIC HISTORY REVIEW, Second Series, Volume XLIII, No. 1

1. The Modern World-System 3, Vol. 3: The Second Era of Great Expansion of the Capitalist World-Economy 1730-1840s (Studies in Social Discontinuity)

4. The Modern World-System 3, Vol. 3: The Second Era of Great Expansion of the Capitalist World-Economy 1730-1840s (Studies in Social Discontinuity)

Descrizione libro Academic Press, 1989. Condizione: Good. A+ Customer service! Satisfaction Guaranteed! Book is in Used-Good condition. Pages and cover are clean and intact. Used items may not include supplementary materials such as CDs or access codes. May show signs of minor shelf wear and contain limited notes and highlighting. Codice articolo 0127859268-2-4