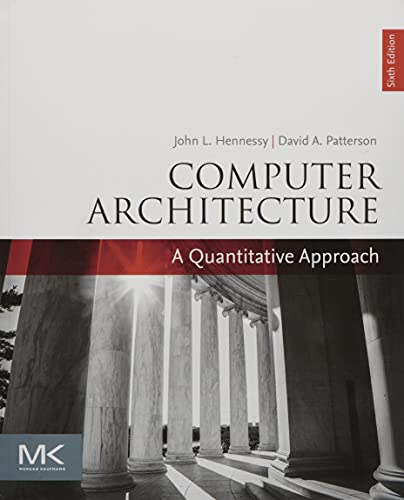 Computer Architecture: A Quantitative Approach, Sixth Edition has been considered essential reading by instructors, students and practitioners of computer design for over 20 years. The sixth edition of this classic textbook from Hennessy and Patterson, winners of the 2017 ACM A.M. Turing Award recognizing contributions of lasting and major technical importance to the computing field, is fully revised with the latest developments in processor and system architecture. The text now features examples from the RISC-V (RISC Five) instruction set architecture, a modern RISC instruction set developed and designed to be a free and openly adoptable standard. It also includes a new chapter on domain-specific architectures and an updated chapter on warehouse-scale computing that features the first public information on Google's newest WSC.

True to its original mission of demystifying computer architecture, this edition continues the longstanding tradition of focusing on areas where the most exciting computing innovation is happening, while always keeping an emphasis on good engineering design.

"What has made this book an enduring classic is that each edition is not an update, but an extensive revision that presents the most current information and unparalleled insight into this fascinating and fast changing field. For me, after over twenty years in this profession, it is also another opportunity to experience that student-grade admiration for two remarkable teachers." --From the Foreword by Luiz Andre Barroso, Google, Inc.

ACM named John L. Hennessy a recipient of the 2017 ACM A.M. Turing Award for pioneering a systematic, quantitative approach to the design and evaluation of computer architectures with enduring impact on the microprocessor industry. John L. Hennessy is a Professor of Electrical Engineering and Computer Science at Stanford University, where he has been a member of the faculty since 1977 and was, from 2000 to 2016, its tenth President. Prof. Hennessy is a Fellow of the IEEE and ACM; a member of the National Academy of Engineering, the National Academy of Science, and the American Philosophical Society; and a Fellow of the American Academy of Arts and Sciences. Among his many awards are the 2001 Eckert-Mauchly Award for his contributions to RISC technology, the 2001 Seymour Cray Computer Engineering Award, and the 2000 John von Neumann Award, which he shared with David Patterson. He has also received seven honorary doctorates.

Descrizione libro Morgan Kaufmann, 2017. Soft cover. Condizione: New. 5th or later Edition. New. US Edition. 6 Ed. Select Expedited to get your book in 3 to 5 business days within USA. All packages can be tracked. Excellent service. Thank you for looking. Codice articolo 9780128119051