Articoli correlati a Statistical Methods for the Social Sciences

Statistical Methods for the Social Sciences 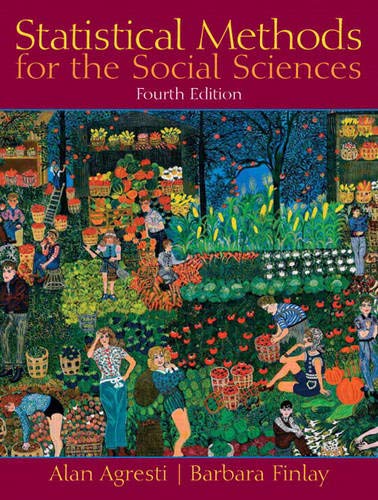 The book presents an introduction to statistical methods for students majoring in social science disciplines.  No previous knowledge of statistics is assumed, and mathematical background is assumed to be minimal (lowest-level high-school algebra).

The book contains sufficient material for a two-semester sequence of courses.  Such sequences are commonly required of social science graduate students in sociology, political science, and psychology. Students in geography, anthropology, journalism, and speech also are sometimes required to take at least one statistics course.

"This text is readable, understandable, and well-organized. It provides good examples with SPSS output." (Robert Wilson, University of Delaware).

"Overall, [Agresti/ Finlay] is a good book for introductory statistics that targets general audiences...it covers most topics you want to cover and allows the instructor to choose which topics to include." (Youqin Huang, State University of New York, Albany)

"I originally started using the Agresti/ Finlay book based on its reputation as "the class of the market", in terms of being unfailingly statistically correct and having a "modern" perspective. By "modern", I mean that it is model rather than test oriented, that it gives heavy emphasis to confidence intervals and p-values rather than using arbitrary levels of significance, and that it eschews computational formulae. It has met those expectations..." (Michael Lacey, Colorado State University)

"..the book has been a good and helpful resource for me in preparing the class notes and assigning homework qustions. The main concepts to be understood by students are sampling distribution, confidence interval, p-value, linear regression. The book helps in this..." (Arne Bathke, University of Kentucky)

Alan Agresti is Distinguished Professor in the Department of Statistics at the University of Florida. He has been teaching statistics there for 30 years, including the development of three courses in statistical methods for social science students and three courses in categorical data analysis. He is author of over 100 refereed article and four texts including "Statistics: The Art and Science of Learning From Data" (with Christine Franklin, Prentice Hall, 2nd edition 2009) and "Categorical Data Analysis" (Wiley, 2nd edition 2002). He is a Fellow of the American Statistical Association and recipient of an Honorary Doctor of Science from De Montfort University in the UK. In 2003 he was named "Statistician of the Year" by the Chicago chapter of the American Statistical Association and in 2004 he was the first honoree of the Herman Callaert Leadership Award in Biostatistical Education and Dissemination awarded by the University of Limburgs, Belgium. He has held visiting positions at Harvard University, Boston University, London School of Economics, and Imperial College and has taught courses or short courses for universities and companies in about 20 countries worldwide. He has also received teaching awards from UF and an excellence in writing award from John Wiley & Sons.

Descrizione libro Prentice Hall. soft cover. Condizione: New. International Edition. No supplemental materials. International Editions may have a different cover or ISBN but generally have the exact same content as the US edition, just at a more affordable price. In some cases, end of chapter questions may vary slightly from the US edition. International Editions are typically printed in grayscale, and likely will not have any color throughout the book. New. Books ship from multiple locations depending on availability. All orders are shipped with tracking information. We take pride in our customer service. Please contact us if you have any questions regarding this listing. Codice articolo 10268