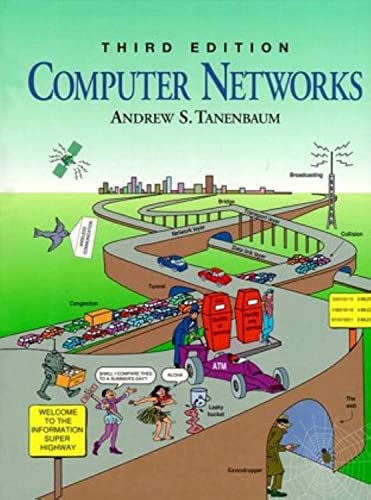 Appropriate for courses titled Computer Networking or Introduction to Networking at both the undergraduate and graduate level in Computer Science, Electrical Engineering, CIS, MIS, and Business Departments. In this highly anticipated revision, Tanenbaum takes a structured approach to explaining how networks work from the inside out. He starts with an explanation of the physical layer of networking, computer hardware and transmission systems; then works his way up to network applications. Tanenbaum's in-depth application coverage includes email; the domain name system; the World Wide Web (both client- and server-side); and multimedia (including voice over IP, Internet radio video on demand, video conferencing, and streaming media. Each chapter follows a consistent approach: Tanenbaum presents key principles, then illustrates them utilizing real-world example networks that run through the entire book-the Internet, and wireless networks, including Wireless LANs, broadband wireless and Bluetooth. This new Fourth Edition contains a new chapter devoted exclusively to network security. The textbook is supplemented by a Solutions Manual, as well as a Website containing PowerPoint slides, art in various forms, and other tools for instruction, including a protocol simulator whereby students can develop and test their own network protocols.

ANDREW S. TANENBAUM is Professor of Computer Science at Vrije Universiteit, Amsterdam, The Netherlands, and Scientific Director of ASCI, a Dutch graduate school established by leading universities throughout the Netherlands. He is also a Fellow of the IEEE and a Fellow of the ACM. Other books Tanenbaum has authored or co-authored include Structured Computer Organization, Fourth Edition; Operating Systems: Design and Implementation, Second Edition; Modern Operating Systems, Second Edition; and Distributed Systems: Principles and Paradigms (all from Prentice Hall).

Computer Networks, Fourth Edition is the ideal introduction to today's networks―and tomorrow's. This classic best seller has been thoroughly updated to reflect the newest and most important networking technologies with a special emphasis on wireless networking, including 802.11, Bluetooth, broadband wireless, ad hoc networks, i-mode, and WAP. But fixed networks have not been ignored either with coverage of ADSL, gigabit Ethernet, peer-to-peer networks, NAT, and MPLS. And there is lots of new material on applications, including over 60 pages on the Web, plus Internet radio, voice over IP, and video on demand.Finally, the coverage of network security has been revised and expanded to fill an entire chapter.

Author, educator, and researcher Andrew S. Tanenbaum, winner of the ACM Karl V. Karlstrom Outstanding Educator Award, carefully explains how networks work on the inside, from underlying hardware at the physical layer up through the top-level application layer. Tanenbaum covers all this and more:

The book gives detailed descriptions of the principles associated with each layer and presents many examples drawn from the Internet and wireless networks.

Descrizione libro Condizione: New. Brand New Original US Edition.We Ship to PO BOX Address also. EXPEDITED shipping option also available for faster delivery.This item may ship fro the US or other locations in India depending on your location and availability. Codice articolo AUDUU-34950