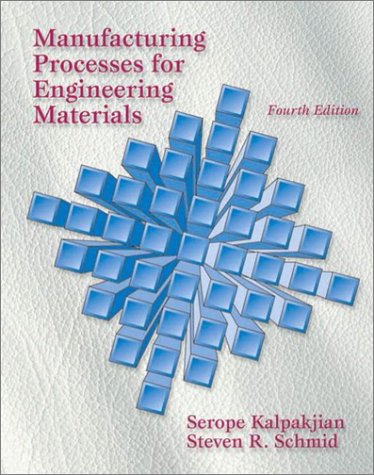 Serope Kalpakjian taught and conducted research at the Illinois Institute of Technology for 38 years prior to his retirement in 2001 as professor emeritus of mechanical and materials engineering. After graduating from Robert College (high honors), Harvard University, and the Massachusetts Institute of Technology, he joined Cincinnati Milacron, where he was a research supervisor in advanced metal-forming processes. He is the author of numerous technical papers and several articles in handbooks and encyclopedias and has edited various conference proceedings. In addition, Professor Kalpakjian has served on the editorial bards of several journals and the Encyclopedia Americana and is the coauthor of Lubricants and Lubrication in Metalworking Operations. Both first editions of his textbooks, Manufacturing Processes for Engineering Materials and Manufacturing Engineering and Technology, have received the M. Eugene Merchant Manufacturing Textbook Award. He is a Life Fellow of the ASME, Fellow of the SME, Fellow and Life Member of ASM International, emeritus member of CIRP (International Institution for Production Engineering Research), and a founding member and past president of NAMRI/SME.

Among the awards Professor Kalpakjian has received are the Forging Industry Educational and Research Foundation Best Paper Award (1966), an Excellence in Teaching Award from IIT (1970), the Centennial Medallion from the ASME (1980), the International Education Award from the SME (1989), a Person of the Millennium Award from IIT (1999), and the Albert Easton White Distinguished Teacher Award from ASM International (2000). SME named the Outstanding Young Manufacturing Engineer Award after Professor Kalpakjian for the year 2002.

Steven R. Schmid is an associate professor with the Department of Aerospace and Mechanical Engineering, University of Notre Dame, where he teaches and performs research in the general areas of manufacturing, machine design, and tribology. As the director of the Manufacturing Tribology Laboratory at the university, he oversees industry- and government-funded research on a variety of manufacturing topics, including tribological issues in rolling, forging and sheet-metal forming, polymer processing, medical-device design and manufacture, and nanomechanics.

He received the B.S. degree in mechanical engineering from the Illinois Institute of Technology (with honors) and M.S. and Ph.D. degrees, both in mechanical engineering, from Northwestern University. He has received numerous awards, including the John T Parsons Award from the SME (2000), the Newkirk Award from the ASME (2000), and the Kaneb Center Teaching Award (2000). He is the recipient of a National Science Foundation CAREERS Award (1996) and an ALCOA Foundation Award (1994). Dr. Schmid is the author of over 50 technical papers; has edited three conference proceedings; has coauthored two books, Fundamentals o f Machine Elements and Manufacturing Engineering and Tecbnology; and has contributed two chapters to the CRC Handbook of Modern Tribology. He serves on the Tribology Division Executive Committee of the ASME, is an associate editor of the Journal o f Manufacturing Science and Engineering, and is a registered professional engineer and certified manufacturing engineer.

Manufacturing Processes for Engineering Materials, Fourth Edition is a comprehensive text, written mainly for students in mechanical, industrial, and metallurgical and materials engineering programs. The text, as well as the numerous examples and case studies in each chapter, clearly show that manufacturing engineering is a complex and interdisciplinary subject. The topics are organized and presented in such a manner that they motivate and-challenge students to present technically and economically viable solutions to a wide variety of questions and problems, including product design. Since the publication of the third edition, there have been rapid and significant advances in various areas in manufacturing. The fourth edition of Manufacturing Processes for Engineering Materials, while continuing with balanced coverage of the relevant fundamentals, analytical approaches, and applications, reflects these new advances.

New in the Fourth Edition: