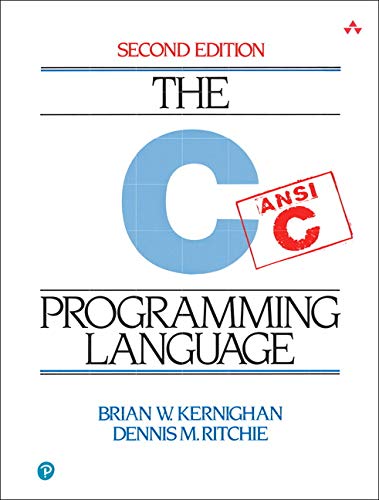 Brian W. Kernighan received his BASc from the University of Toronto in 1964 and a PhD in electrical engineering from Princeton in 1969. He was a member of the Computing Science Research center at Bell Labs until 2000, and is now a professor in the Computer Science Department at Princeton. He was a co-creator of several programming languages, including AWK, AMPL, and a number of tools for document preparation. He is the co-author of 10 books and some technical papers, and holds 4

patents. He was elected to the National Academy of Engineering in 2002. His research areas include programming languages, tools and interfaces that make computers easier to use, often for non-specialist users. He is also interested in technology

Dennis Ritchie was a computer scientist notable for his influence on ALTRAN, B, BCPL, C, Multics, and Unix.

This book is meant to help the reader learn how to program in C. It is the definitive reference guide, now in a second edition. Although the first edition was written in 1978, it continues to be a worldwide best-seller. This second edition brings the classic original up to date to include the ANSI standard.

We have tried to retain the brevity of the first edition. C is not a big language, and it is not well served by a big book. We have improved the exposition of critical features, such as pointers, that are central to C programming. We have refined the original examples, and have added new examples in several chapters. For instance, the treatment of complicated declarations is augmented by programs that convert declarations into words and vice versa. As before, all examples have been tested directly from the text, which is in machine-readable form.

As we said in the first preface to the first edition, C "wears well as one's experience with it grows." With a decade more experience, we still feel that way. We hope that this book will help you to learn C and use it well.

Descrizione libro Pearson, 1988. Condizione: New. Brand new book. This is an international edition textbook with identical content as the US version and is usually paperback bound instead of hardcover. We ship all our orders from CA/IL, USA (depending on your address) and NOT from Asia! Buy with confidence from a 5-star US based seller. Choose expedited shipping for superfast delivery with tracking. Codice articolo 586|9780131103627

Descrizione libro Prentice Hall, 1988. soft cover. Condizione: New. International Edition. No supplemental materials. International Editions may have a different cover or ISBN but generally have the exact same content as the US edition, just at a more affordable price. In some cases, end of chapter questions may vary slightly from the US edition. International Editions are typically printed in grayscale, and likely will not have any color throughout the book. New. Books ship from multiple locations depending on availability. All orders are shipped with tracking information. We take pride in our customer service. Please contact us if you have any questions regarding this listing. Codice articolo 10391

Descrizione libro Microsoft Press Mrz 1988, 1988. Taschenbuch. Condizione: Neu. Neuware - This second editon describes C as defined by the ANSI standard. This book is meant to help the reader learn how to program in C. The book assumes some familiarity with basic programming concepts like variables, assignment statements, loops, and functions. A novice programmer should be able to read along and pick up the language. 274 pp. Englisch. Codice articolo 9780131103627