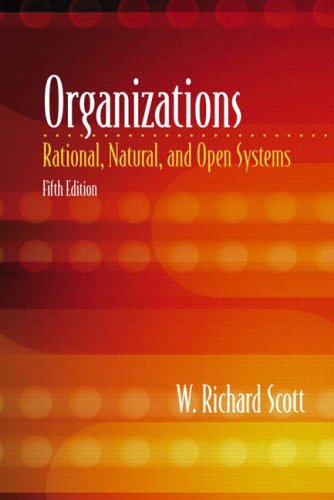 W. Richard (Dick) Scott received his undergraduate and M.A. degrees from the University of Kansas and his Ph.D. in sociology from the University of Chicago. He is currently Emeritus Professor in the Department of Sociology at Stanford University where he also holds courtesy appointments in the Graduate School of Business, School of Education, and School of Medicine. He has been at Stanford throughout his professional career. In addition to serving as chair of the Department of Sociology, from 1972 to 1989 he directed the Organization Research Training Program at Stanford under the auspices of the National Institute of Mental Health, and was the founding director of the Stanford Center for Organizations Research, 1988-1996.

He is the author or co-author of over one hundred scholarly articles and book chapters and has written or co-written about a dozen books and edited or co-edited another dozen. His most recent books include Institutional Change and Healthcare Organizations (2000) with Martin Ruef, Peter Mendel and Carol Caronna, and Institutions and Organizations, Second Edition (2001). He has served on the editorial board of many professional journals and was the editor of the Annual Review of Sociology from 1986-1991.

Scott is a past fellow of the Center for Advanced Study in the Behavioral Sciences. In 1988, he received the Distinguished Scholar Award from the Management and Organization Theory Division of the Academy of Management; and in 1996, he was selected for the Richard D. Irwin Award for Scholarly Contributions to Management from the Academy of Management. In 2000, the W. Richard Scott Award for Distinguished Scholarship was created by the Organizations, Occupations, and Work Section of the American Sociological Association, to annually recognize an outstanding article-length contribution to the field. He has received honorary degrees from the Copenhagen Business School (2000) and from the Helsinki School of Economics and Business Administration (2001).