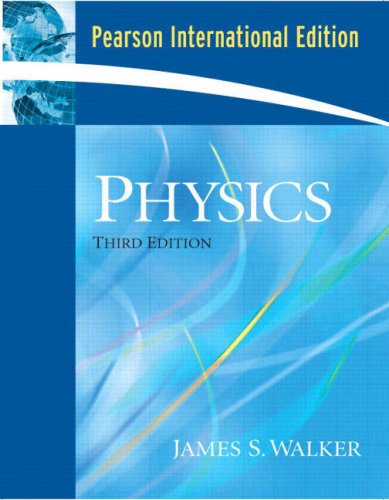 Walker uses an integrated "suite" of tools, worked Examples, Active Examples, and Conceptual Checkpoints, to make conceptual understanding an integral part of solving quantitative problems. The pedagogy and approach are based on over 20 years of teaching and reflect the results of physics education research.

James S. Walker James Walker obtained his Ph.D. in theoretical physics from the University of Washington in 1978. He subsequently served as a post-doc at the University of Pennsylvania, the Massachusetts Institute of Technology, and the University of California at San Diego before joining the physics faculty at Washington State University in 1983. Professor Walker’s research interests include statistical mechanics, critical phenomena, and chaos. His many publications on the application of renormalization-group theory to systems ranging from absorbed monolayers to binary-fluid mixtures have appeared in Physical Review, Physical Review Letters, Physica, and a host of other publications. He has also participated in observations on the summit of Mauna Kea, looking for evidence of extra-solar planets.

Jim Walker likes to work with students at all levels, from judging elementary school science fairs to writing research papers

with graduate students, and has taught introductory physics for many years. His enjoyment of this course and his empathy for students have earned him a reputation as an innovative, enthusiastic, and effective teacher. Jim’s educational publications include “Reappearing Phases” (Scientific American, May 1987) as well as articles in the American

Journal of Physics and The Physics Teacher. In recognition of his contributions to the teaching of physics, Jim was named Boeing Distinguished Professor of Science and Mathematics Education for 2001―2003.

Descrizione libro Pearson Education (US). Condizione: Fair. Pearson International Edition. Creases and a few ink stains, the bottom of the spine is torn as well but this does not affect the binding. Codice articolo 035684