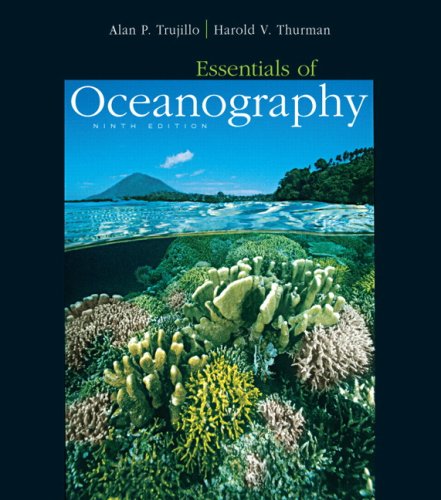 For introductory courses in Oceanography. "How do the oceans work?" To help students find the answers, Trujillo and Thurman present in-depth and rigorous discussions of oceanographic concepts and demystify the science for the non-science student. Their systems approach highlights the interdisciplinary relationship between oceanographic phenomena and how those phenomena affect other Earth systems. Scientific information from geology, chemistry, physics, and biology is incorporated to illustrate how each of these disciplines relates to the ocean. This unique combination of rigor and accessibility has made Essentials of Oceanography the best-selling brief book - and one of the best-sellers, period - on the market.

Alan P. Trujillo Al Trujillo teaches at Palomar Community College in San Marcos, CA, where he is co-Director of the Oceanography Program and Chair of the Earth Sciences Department.  He received his bachelor’s degree in geology from the University of California at Davis and his master’s degree in geology from Northern Arizona University, afterwards working for several years in industry as a development geologist, hydrogeologist, and computer specialist.  Al began teaching in the Earth Sciences Department at Palomar in 1990 and in 1997 was awarded Palomar’s Distinguished Faculty Award for Excellence in Teaching.  He has co-authored Introductory Oceanography with Hal Thurman and is a contributing author for the textbooks Earth and Earth Science.  In addition to writing and teaching, Al works as a naturalist and lecturer aboard natural history expedition vessels in Alaska and the Sea of Cortez/Baja California.  His research interests include beach processes, sea cliff erosion, and computer applications in oceanography.  Al and his wife, Sandy, have two children, Karl and Eva.

Harold V. Thurman Hal Thurman retired in May 1994, after 24 years of teaching in the Earth Sciences Department of Mt. San Antonio College in Walnut, California.  Interest in geology led to a bachelor’s degree from Oklahoma A&M University, followed by seven years working as a petroleum geologist, mainly in the Gulf of Mexico, where his interest in oceans developed.  He earned a master’s degree from California State University at Los Angeles and then joined the Earth sciences faculty at Mt. San Antonio College.  Other books that Hal has co-authored include Introductory Oceanography (with Alan Trujillo) and a marine biology textbook.  He has also written articles on the Pacific, Atlantic, Indian, and Arctic Oceans for the 1994 edition of World Book Encyclopedia and served as a consultant on the National Geographic publication Realms of the Sea.  He still enjoys going to sea on vacations with his wife Iantha.