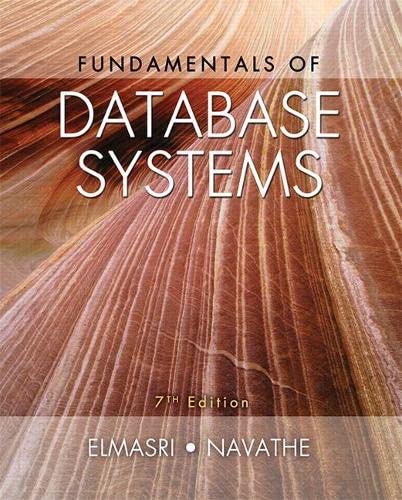 
The book is meant to be used as a textbook for a one- or two-semester course in database systems at the junior, senior, or graduate level, and as a reference book. The goal is to provide an in-depth and up-to-date presentation of the most important aspects of database systems and applications, and related technologies. It is assumed that readers are familiar with elementary programming and data-structuring concepts and that they have had some exposure to the basics of computer organization.

Ramez Elmasri is a professor and the associate chairperson of the Department of Computer Science and Engineering at the University of Texas at Arlington. He has over 140 refereed research publications, and has supervised 16 PhD students and over 100 MS students. His research has covered many areas of database manage- ment and big data, including conceptual modeling and data integration, query languages and indexing techniques, temporal and spatio-temporal databases, bioinformatics databases, data collection from sensor networks, and mining/analysis of spatial and spatio-temporal data. He has worked as a consultant to various companies, including Digital, Honeywell, Hewlett Packard, and Action Technologies, as well as consulting with law firms on patents. He was the Program Chair of the 1993 International Conference on Conceptual Modeling (ER conference) and program vice-chair of the 1994 IEEE International Conference on Data Engineering. He has served on the ER conference steering committee and has been on the program committees of many conferences. He has given several tutorials at the VLDB, ICDE, and ER conferences. He also co-authored the book “Operating Systems: A Spiral Approach” (McGraw-Hill, 2009) with Gil Carrick and David Levine. Elmasri is a recipient of the UTA College of Engineering Outstanding Teaching Award in 1999. He holds a BS degree in Engineering from Alexandria University, and MS and PhD degrees in Computer Science from Stanford University.

Shamkant B. Navathe is a professor and the founder of the database research group at the College of Computing, Georgia Institute of Technology, Atlanta. He has worked with IBM and Siemens in their research divisions and has been a consultant to various companies including Digital, Computer Corporation of America, Hewlett Packard, Equifax, and Persistent Systems. He was the General Co-chairman of the 1996 International VLDB (Very Large DataBase) conference in Bombay, India. He was also program co-chair of ACM SIGMOD 1985 International Conference and General Co-chair of the IFIP WG 2.6 Data Semantics Workshop in 1995. He has served on the VLDB foundation and has been on the steering committees of several conferences. He has been an associate editor of a number of journals including ACM Computing Surveys, and IEEE Transactions on Knowledge and Data Engineering. He also co-authored the book “Conceptual Design: An Entity Relationship Approach” (Addison Wesley, 1992) with Carlo Batini and Stefano Ceri. Navathe is a fellow of the Association for Computing Machinery (ACM) and recipient of the IEEE Computer Science, Engineering and Education Impact award in 2015. Navathe holds a Ph.D. from the University of Michigan and has over 150 refereed publications in journals and conferences.

Descrizione libro Pearson, 2015. Condizione: New. Brand new book. This is an international edition textbook with identical content as the US version and is usually paperback bound instead of hardcover. We ship all our orders from CA/IL, USA (depending on your address) and NOT from Asia! Buy with confidence from a 5-star US based seller. Choose expedited shipping for superfast delivery with tracking. Codice articolo 734|9780133970777

Descrizione libro Pearson, 2015. soft cover. Condizione: New. International Edition. No supplemental materials. International Editions may have a different cover or ISBN but generally have the exact same content as the US edition, just at a more affordable price. In some cases, end of chapter questions may vary slightly from the US edition. International Editions are typically printed in grayscale, and likely will not have any color throughout the book. New. Books ship from multiple locations depending on availability. All orders are shipped with tracking information. We take pride in our customer service. Please contact us if you have any questions regarding this listing. Codice articolo 11338

Descrizione libro Pearson, 2015. Softcover. Condizione: New. ***International Edition***Soft cover/Paperback*** Textbook printed in English. ***Brand New***. Most international edition has different ISBN and Cover design. Some book may show sales disclaimer such as "Not for Sale or Restricted in US" on the cover page but it is absolutely legal to use. Please provides validphone number with your order for easy delivery. Codice articolo g0133970779

Descrizione libro Pearson, 2015. Soft cover. Condizione: New. Brand New International Edition textbook. Some book may show sales disclaimer such as "Not for Sale or Restricted in US" on the cover page but it is absolutely legal to use in US or Canada. Ship from Multiple Locations, including Asia , Hong Kong ,Taiwan , US or Canada depend on stock location. Codice articolo 000473