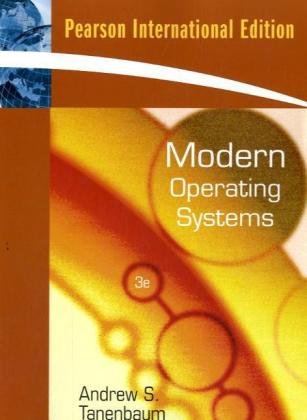 For Introductory Courses in Operating Systems in Computer Science, Computer Engineering, and Electrical Engineering programs. The widely anticipated revision of this worldwide best-seller incorporates the latest developments in operating systems (OS)technologies. The Third Edition includes up-to-date materials on relevant. OS such as Linux, Windows, and embedded real-time and multimedia systems. Tanenbaum also provides information on current research based on his experience as an operating systems researcher. Student Resources?Include: Online Exercises - Provide hands-on experience with building as well as analyzing the performance of OS. In particular, these exercises have been designed to provide experience with analyzing the resource consumptions in Windows and Linux. Simulation Exercises - Designed to provide experience with building some key components of an OS, including process scheduling, main memory allocation, paging algorithms and virtual memory, and file systems. Lab Experiments Please note, GOAL is no longer available with this book. Password-Protected Instructor Resources (Select the Resources Tab to View Downloadable Files): Power Point Lecture Slides Figures in both .jpeg and .eps file format Solutions to Exercises Please note, GOAL is no longer available with this book. Modern Operating Systems, 3e is the recipient of the Text and Authors Association (TAA) 2010 McGuffey Longevity Award. The McGuffey Longevity Award recognizes textbooks whose excellence has been demonstrated over time.

Andrew S. Tanenbaum has an S.B. degree from M.I.T. and a Ph.D. from the University of California at Berkeley. He is currently a Professor of Computer Science at the Vrije Universiteit in Amsterdam, The Netherlands, where he is head of the Computer Systems Department. He is also the Dean of the Advanced School for Computing and Imaging, an interuniversity graduate school doing research on advanced parallel, distributed, and imaging systems. Nevertheless, he is trying very hard to avoid turning into a bureaucrat.

In the past, he has done research on compilers, operating systems, networking, and local-area distributed systems. His current research focuses primarily on the design of wide-area distributed systems that scale to a billion users. This research is being done together with Dr. Maarten van Steen. Together, all his research projects have led to over 90 refereed papers in journals and conference proceedings and five books.

Prof. Tanenbaum has also produced a considerable volume of software. He was the principal architect of the Amsterdam Compiler Kit, a widely-used toolkit for writing portable compilers, as well as of MINIX, a small UNIX clone intended for use in student programming labs. Together with his Ph.D. students and programmers, he helped design the Amoeba distributed operating system, a high-performance microkernel-based distributed operating system. The MINIX and Amoeba systems are now available for free via the Internet.

His Ph.D. students have gone on to greater glory after getting their degrees. He is very proud of them. In this respect he resembles a mother hen.

Prof. Tanenbaum is a Fellow of the ACM, a Fellow of the IEEE, a member of the Royal Netherlands Academy of Arts and Sciences, winner of the 1994 ACM Karl V Karlstrom Outstanding Educator Award, and winner of the 1997 ACM/SIGCSE Award for Outstanding Contributions to Computer Science Education. He is also listed in Who's Who in the World. His home page on the World Wide Web can be found at URL http://www.cs.vu.nl/~ast/.