Articoli correlati a The Penguin Complete Father Brown: The Enthralling... 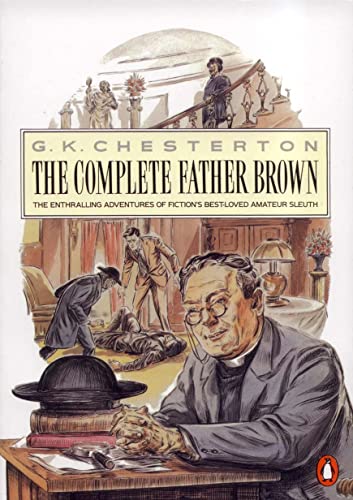 Immortalized in these famous stories, G.K. Chesterton's endearing amateur sleuth has entertained countless generations of readers. For, as his admirers know, Father Brown's cherubic face and unworldly simplicity, his glasses and his huge umbrella, disguise a quite uncanny understanding of the criminal mind at work.

G.K. Chesteron was born in 1874, and educated at St Paul’s School, where, despite his efforts to achieve honourable oblivion at the bottom of his class, he was singled out as a boy with distinct literary promise. He decided to follow art as a career, and studied at the Slade School, where, while ‘attending or not attending to his studies’, he met Ernest Hodder-Williams, who encouraged Chesterton in his writing. At his request he reviewed a number of books for the Bookman and found himself launched on a profession he was to follow all his life. Probably his most famous stories are those of ‘Father Brown’, but he wrote much about every conceivable subject under or beyond the sun. The best accounts of his life are to be found in his own Autobiography, published soon after his death in 1936, and in Miss Maisie Ward’s Life of him. Many of his books have been published by Penguin.