Articoli correlati a The Importance of Being Earnest

Wilde, Oscar The Importance of Being Earnest

The Importance of Being Earnest 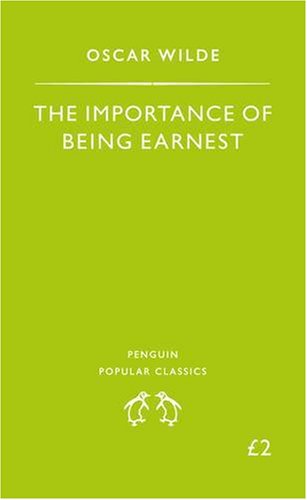 Oscar Wilde's brilliant play makes fun of the English upper classes with light-hearted satire and dazzling humour. It is 1890's England and two young gentlemen are being somewhat limited with the truth. To inject some excitement into their lives, Mr Worthing invents a brother, Earnest, as an excuse to leave his dull country life behind him to pursue the object of his desire, the ravishing Gwendolyn. While across town Algernon Montecrieff decides to take the name Earnest, when visiting Worthing's young ward Cecily. The real fun and confusion begins when the two end up together and their deceptions are in danger of being revealed.

Oscar Fingal O'Flahertie Wills Wilde was born in Dublin in 1854. After his marriage to Constance Lloyd in 1884, he tried to establish himself as a writer, but with little initial success. However, his three volumes of short fiction, The Happy Prince (1888), Lord Arthur Savile's Crime (1891) and A House of Pomegranates (1891), together with his only novel, The Picture of Dorian Gray (1891), gradually won him a reputation as a modern writer with an original talent, a reputation confirmed and enhanced by the phenomenal success of his Society Comedies – Lady Windermere's Fan, A Woman of No Importance, An Ideal Husband and The Importance of Being Earnest, all performed on the West End stage between 1892 and 1895. Success, however, was short-lived. In 1891 Wilde had met and fallen in love with Lord Alfred Douglas. In 1895, when his success as a dramatist was at its height, Wilde brought an unsuccessful libel action against Douglas's father, the Marquess of Queensberry. Wilde lost the case and two trials later was sentenced to two years' imprisonment for acts of gross indecency. As a result of this experience he wrote The Ballad of Reading Gaol. He was released from prison in 1897 and went into an immediate self-imposed exile on the Continent. He died in Paris in ignominy in 1900.