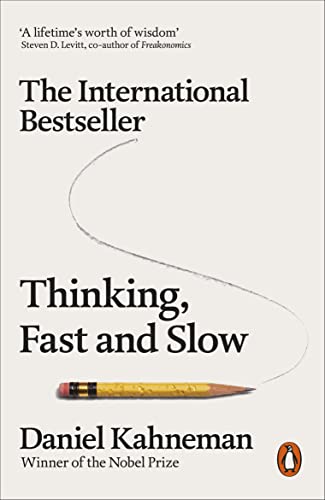 'A lifetime's worth of wisdom' Steven D. Levitt, co-author of Freakonomics
'There have been many good books on human rationality and irrationality, but only one masterpiece. That masterpiece is Thinking, Fast and Slow' Financial Times

Why is there more chance we'll believe something if it's in a bold type face? Why are judges more likely to deny parole before lunch? Why do we assume a good-looking person will be more competent? The answer lies in the two ways we make choices: fast, intuitive thinking, and slow, rational thinking. This book reveals how our minds are tripped up by error and prejudice (even when we think we are being logical), and gives you practical techniques for slower, smarter thinking. It will enable to you make better decisions at work, at home, and in everything you do.

Recensione:
There have been many good books on human rationality and irrationality, but only one masterpiece. That masterpiece is Daniel Kahneman's Thinking, Fast and Slow.Kahneman, a winner of the Nobel Prize for economics, distils a lifetime of research into an encyclopedic coverage of both the surprising miracles and the equally surprising mistakes of our conscious and unconscious thinking. He achieves an even greater miracle by weaving his insights into an engaging narrative that is compulsively readable from beginning to end. My main problem in doing this review was preventing family members and friends from stealing my copy of the book to read it for themselves...this is one of the greatest and most engaging collections of insights into the human mind I have read (William Easterly Financial Times)

Absorbing, intriguing...By making us aware of our minds' tricks, Kahneman hopes to inspire individuals and organisations to identify strategies to outwit them (Jenni Russell Sunday Times)

Profound . . . As Copernicus removed the Earth from the centre of the universe and Darwin knocked humans off their biological perch, Mr. Kahneman has shown that we are not the paragons of reason we assume ourselves to be (The Economist)

[Thinking, Fast and Slow] is wonderful, of course. To anyone with the slightest interest in the workings of his own mind, it is so rich and fascinating that any summary would seem absurd (Michael Lewis Vanity Fair)

It is an astonishingly rich book: lucid, profound, full of intellectual surprises and self-help value. It is consistently entertaining and frequently touching, especially when Kahneman is recounting his collaboration with Tversky . . . So impressive is its vision of flawed human reason that the New York Times columnist David Brooks recently declared that Kahneman and Tversky's work 'will be remembered hundreds of years from now,' and that it is 'a crucial pivot point in the way we see ourselves.' They are, Brooks said, 'like the Lewis and Clark of the mind' . . . By the time I got to the end of Thinking, Fast and Slow, my skeptical frown had long since given way to a grin of intellectual satisfaction. Appraising the book by the peak-end rule, I overconfidently urge everyone to buy and read it. But for those who are merely interested in Kahenman's takeaway on the Malcolm Gladwell question it is this: If you've had 10,000 hours of training in a predictable, rapid-feedback environment-chess, firefighting, anesthesiology-then blink. In all other cases, think (The New York Times Book Review)

[Kahneman's] disarmingly simple experiments have profoundly changed the way that we think about thinking . . . We like to see ourselves as a Promethean species, uniquely endowed with the gift of reason. But Mr. Kahneman's simple experiments reveal a very different mind, stuffed full of habits that, in most situations, lead us astray (Jonah Lehrer The Wall Street Journal)

This is a landmark book in social thought, in the same league as The Wealth of Nations by Adam Smith and The Interpretation of Dreams by Sigmund Freud (Nassim Nicholas Taleb, author of 'The Black Swan')

Daniel Kahneman is among the most influential psychologists in history and certainly the most important psychologist alive today...The appearance of Thinking, Fast and Slow is a major event (Steven Pinker, author of The Language Instinct)

Daniel Kahneman is one of the most original and interesting thinkers of our time. There may be no other person on the planet who better understands how and why we make the choices we make. In this absolutely amazing book, he shares a lifetime's worth of wisdom presented in a manner that is simple and engaging, but nonetheless stunningly profound. This book is a must read for anyone with a curious mind (Steven D. Levitt, co-author of 'Freakonomics')

This book is a tour de force by an intellectual giant; it is readable, wise, and deep. Buy it fast. Read it slowly and repeatedly. It will change the way you think, on the job, about the world, and in your own life (Richard Thaler, co-author of 'Nudge')
L'autore:
Daniel Kahneman is a Senior Scholar at Princeton University, and Emeritus Professor of Public Affairs, Woodrow Wilson School of Public and International Affairs. He was awarded the Nobel Prize in Economics in 2002.