Articoli correlati a Three Men in a Boat (Library)

Three Men in a Boat (Library) 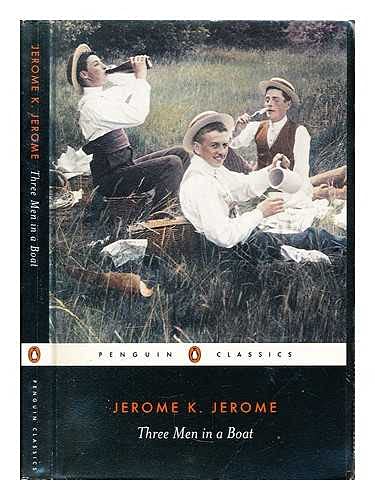 Martyrs to hypochondria and general seediness, J. and his friends George and Harris decide that a jaunt up the Thames would suit them to a 'T'. But when they set off, they can hardly predict the troubles that lie ahead with tow-ropes, unreliable weather-forecasts and tins of pineapple chunks - not to mention the devastation left in the wake of J.'s small fox-terrier Montmorency. Three Men in a Boat was an instant success when it appeared in 1889, and, with its benign escapism, authorial discursions and wonderful evocation of the late-Victorian 'clerking classes', it hilariously captured the spirit of its age.

Jerome K Jerome (1859-1927) became an actor and published a couple of volumes of humorous pieces and light essays about the theatre. He achieved lasting fame with THREE MEN IN A BOAT. He later went on to become one of the founders of the humorous magazine, The Idler, and continued to write articles and plays.
Jeremy Lewis has recently written a biography of Cyril Connolly and has edited the Raffles books.

Descrizione libro Paperback. Condizione: Very Good. The book has been read, but is in excellent condition. Pages are intact and not marred by notes or highlighting. The spine remains undamaged. Codice articolo GOR004580403

Descrizione libro Paperback. Condizione: Good. The book has been read but remains in clean condition. All pages are intact and the cover is intact. Some minor wear to the spine. Codice articolo GOR004657415

Descrizione libro Penguin Books Ltd 2004-03-25, 2004. Paperback. Condizione: Very Good. Item is in very good condition. If supplemental codes/CDs for textbooks are required please contact us prior to purchasing as they may be missing. Photos are stock pictures and not of the actual item. Codice articolo DS-0141441224-2