Articoli correlati a The Book of Other People

The Book of Other People

The Book of Other People 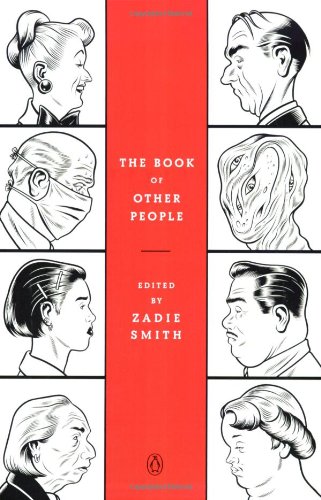 In an unusual introduction to the fiction writing process, a group of notable authors and graphic novelists--including Nick Horsby, Chris Ware, Colm Tóibín, George Saunders, and others--describe how they create a character, in an anthology in which each writer develops an individual fictional character. Original.

"...But just when you're ready to howl in frustration at the anthologification of the book world-I've seen the best minds of my generation, live blogging about recipes that inspire them-along comes The Book of Other People...Other People collects 23 pieces by a who's who of 21st-century geniuses and wunderkinds, from Dave Eggers to Edwidge Dandicat...Smith sent her contributors just one instruction: Make somebody up."
-USA Today

"Whether they are old-fashioned narratives, playful improvisations or comic- strip-like tales told in pictures, these stories force us to re-evaluate that old chestnut "Character is destiny." They remind us that an individual's life is itself a narrative with a beginning, a middle and at least the intimations of an end. And they showcase the many time-honored techniques that writers use to limn their characters' predicaments, from straight-up ventriloquism to the use of unreliable narrators to a "Rashomon"-like splitting of perspectives."
-Michiko Kakutani, The New York Times

"From its strange, graphic-novelesque cover-an array of cartoonish sketches of odd-looking faces in profile, stacked like ladder rungs-to its uncommonly eye- catching lineup of contributors, "The Book of Other People," a 2008 paperback from Penguin Books, is extraordinary."
-Charlotte Observer

"If you only read one book, make it this dazzling selection of short stories..."
-Eve Magazine UK

"...Some of the wittiest and wisest stories you'll read all year..."
-Elle UK

"Character provides the thematic key to these stories, all new to this collection, from some of our finest younger contemporary fiction writers.

Editor and contributor Smith (On Beauty, 2005, etc.) invited 22 other authors, many of them (like her) better known for novels than short fiction, to write a story inspired by the creation of a character. "The instruction was simple," she writes in her introduction, "make somebody up." Yet the stories correspond to no consensus about the role of character in fiction, or a return to realism, or the responsibility of fiction to mirror society. To the contrary, what Smith believes the stories show is that "there are as many ways to create 'character' (or deny the possibility of 'character') as there are writers." The title of each story comes from the name of a character or type ("The Monster") with the selections sequenced alphabetically. Many of the writers, including Smith, come from the McSweeney's and/or Believer literary circle (Dave Eggers, Vendela Vida, Heidi Julavits, Chris Ware, Nick Hornby et al.) and most of the contributions range from the short to the very short (Toby Litt's "The Monster" is a four-page paragraph). With proceeds benefiting 826 New York (a nonprofit organization for the inspiration and development of student writing), none of the writers were paid for their work, with the results sometimes more playful (and occasionally slighter) than one has come to expect from them. Jonathan Lethem's Dickensian titled "Perkus Tooth" offers a hilarious dismissal of rock critics. A.L. Kennedy's "Frank" provides an existential parable about a man who isn't who he thinks he is. Though many of the stories have a first-person perspective, the narrator is rarely the title character, and some of the challenge for the reader can be determining whom a story is really about. In Colm T-ib"n's "Donal Webster," the name of the title character is never even mentioned, leaving the reader to guess who is addressing whom.

While the quality inevitably varies, the spirit of the anthology is that reading should be fun rather than work. -Kirkus Reviews

Zadie Smith is the acclaimed author of White Teeth, The Autograph Man, and On Beauty.

1. The Book of Other People

2. The Book of Other People

3. The Book of Other People

4. The Book of Other People

5. The Book of Other People Smith, Zadie

6. The Book of Other People Smith, Zadie

7. THE BOOK OF OTHER PEOPLE