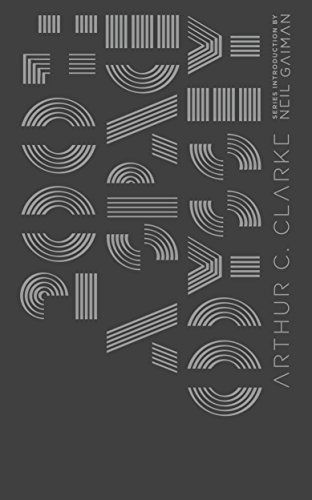 Written when landing on the moon was still a dream, 2001: A Space Odyssey is a science-fiction classic that has changed the way we look at the stars—and ourselves. On the moon, an enigma is uncovered. So great are the implications that, for the first time, men are sent deep into our solar system. But before they can reach their destination, things begin to go very wrong. From the savannas of Africa at the dawn of mankind to the rings of Saturn at the turn of the 21st century, Arthur C. Clarke takes us on a journey unlike any other. Brilliant, compulsive, and prophetic, and the basis for the immensely influential Stanley Kubrick film, 2001: A Space Odyssey tackles the enduring theme of man’s—and technology’s—place in the universe and lives on as a landmark achievement in storytelling.

Six of our greatest masterworks of science fiction and fantasy, in dazzling collector-worthy hardcover editions, and featuring a series introduction by #1 New York Times bestselling author Neil Gaiman, Penguin Galaxy represents a constellation of achievement in visionary fiction, lighting the way toward our knowledge of the universe, and of ourselves. From historical legends to mythic futures, monuments of world-building to mind-bending dystopias, these touchstones of human invention and storytelling ingenuity have transported millions of readers to distant realms, and will continue for generations to chart the frontiers of the imagination.

The Once and Future King by T. H. White
Stranger in a Strange Land by Robert A. Heinlein
Dune by Frank Herbert
2001: A Space Odyssey by Arthur C. Clarke
The Left Hand of Darkness by Ursula K. Le Guin
Neuromancer by William Gibson

For more than seventy years, Penguin has been the leading publisher of classic literature in the English-speaking world. With more than 1,700 titles, Penguin Classics represents a global bookshelf of the best works throughout history and across genres and disciplines. Readers trust the series to provide authoritative texts enhanced by introductions and notes by distinguished scholars and contemporary authors, as well as up-to-date translations by award-winning translators.

“One of the coolest gifts you can get for your favorite sci-fi geek . . . You’re not supposed to judge a book by its cover, but these new Penguin Galaxy hardcovers make it really hard.” —Gizmodo

“Serious science fiction and fantasy readers cannot resist the classics. . . . That’s what makes the Penguin Galaxy series so appealing. . . . Each of the novels here has earned their place in the halls of literary history. . . . Their small form factor and minimalist covers call out to readers and make them fun to read all over again.” —Kirkus Reviews

“[Clarke is] a master who is as deft at generating accelerating, almost painful suspense as he is knowledgeable and accurate (and fascinating) about the technical and human details of space flight and exploration.” —The New York Times

“By standing the universe on its head, he makes us see the ordinary universe in a different light.” —The New Yorker

Arthur C. Clarke (1917–2008) wrote a hundred books and more than a thousand short stories and essays covering science fiction and science fact. The recipient of dozens of awards, fellowships, and honorary doctorates, and the only science-fiction writer to be nominated for the Nobel Peace Prize, he had both an asteroid and a dinosaur species named after him. One of his short stories inspired the World Wide Web; another was expanded into the film 2001: A Space Odyssey, which he co-wrote with Stanley Kubrick. In 1998 he was given a knighthood by Queen Elizabeth. His books have sold more than 100 million copies worldwide.

Neil Gaiman (series introduction) is the #1 New York Times bestselling author of more than twenty books for readers of all ages, including American Gods, The Ocean at the End of the Lane, The Graveyard Book, Coraline, and the Sandman series of graphic novels. He is Professor in the Arts at Bard College.

Alex Trochut (cover designer) is an award-winning artist, graphic designer, illustrator, and typographer. He has designed for The New York Times, The Guardian, Nike, Adidas, The Rolling Stones, Coca-Cola, and Pepsi and was nominated for a 2016 Grammy Award for Best Recording Package. Born in Barcelona, Spain, he lives in Brooklyn.