Articoli correlati a A History of the World in Twelve Maps

Brotton, Jerry A History of the World in Twelve Maps

A History of the World in Twelve Maps 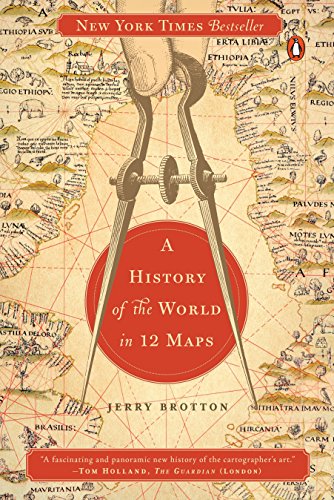 “Maps allow the armchair traveler to roam the world, the diplomat to argue his points, the ruler to administer his country, the warrior to plan his campaigns and the propagandist to boost his cause... rich and beautiful.” – Wall Street Journal

Throughout history, maps have been fundamental in shaping our view of the world, and our place in it. But far from being purely scientific objects, maps of the world are unavoidably ideological and subjective, intimately bound up with the systems of power and authority of particular times and places. Mapmakers do not simply represent the world, they construct it out of the ideas of their age. In this scintillating book, Jerry Brotton examines the significance of 12 maps - from the almost mystical representations of ancient history to the satellite-derived imagery of today. He vividly recreates the environments and circumstances in which each of the maps was made, showing how each conveys a highly individual view of the world. Brotton shows how each of his maps both influenced and reflected contemporary events and how, by considering it in all its nuances and omissions, we can better understand the world that produced it.

Although the way we map our surroundings is more precise than ever before, Brotton argues that maps today are no more definitive or objective than they have ever been. Readers of this beautifully illustrated and masterfully argued book will never look at a map in quite the same way again.

“A fascinating and panoramic new history of the cartographer’s art.”
– The Guardian

“The intellectual background to these images is conveyed with beguiling erudition.... There is nothing more subversive than a map.”
– The Spectator

“A mesmerizing and beautifully illustrated book.”
—The Telegraph

“[A] rewarding journey for the intellectually intrepid.”
—Kirkus


“If there’s a single takeaway from this fascinating and richly illustrated book, it’s that mapmaking is perennially contentious.”
—The Daily Beast


“A stimulating and thought-provoking study of how the mixing of science, politics, and even religion influenced and continues to influence cartography.”
—Booklist


“Maps allow the armchair traveler to roam the world, the diplomat to argue his points, the ruler to administer his country, the warrior to plan his campaigns and the propagandist to boost his cause.  In addition, they can be extraordinarily beautiful... All these facets are represented in British historian Jerry Brotton’s rich A History of the World in 12 Maps.”
—Wall Street Journal


“Author Jerry Brotton's book dips into maps spanning millenia of human experience, from Ptolemy's Geography (circa 150 AD) all the way up to Google Earth, the dynamic, increasingly omnipresent Internet Age way that we answer the age-old question "Where am I?" ...Along the way, he finds some marvelous things.”
—Christian Science Monitor
From the Hardcover edition.

Jerry Brotton is a professor of Renaissance studies at Queen Mary University of London. A renowned broadcaster and critic, he is the author of Global Interests: Renaissance Art Between East and West (with Lisa Jardine), The Renaissance Bazaar, The Sale of the Late King’s Goods (short-listed for the Samuel Johnson Prize and the Hessell-Tiltman Prize), Great Maps, and The New York Times bestselling, award-winning A History of the World in Twelve Maps, which has been translated into eleven languages. His most recent book, published as The Sultan and the Queen in the US (and This Orient Isle in the UK), tells the fascinated story of Queen Elizabeth’s outreach to the Ottoman Sultan and to Muslim rulers in Iran and Morocco, which began shortly after she was excommunicated by the Pope and most of Europe’s markets were closed to her Protestant and Jewish merchants. It describes the birth of the joint stock company, and how trade with the east formed the basis for the future British empire.

1. A History of the World in Twelve Maps

Descrizione libro Penguin Books, 2014. Paperback. Condizione: New. Illustrated. Paperback. A New York Times Bestseller Maps allow the armchair traveler to roam the world, the diplomat to argue his points, the ruler to administer his country, the warrior to plan his campaigns and.Shipping may be from multiple locations in the US or from the UK, depending on stock availability. 544 pages. 0.603. Codice articolo 9780143126027