Articoli correlati a The Age of Scandal: An Excursion Through a Minor Period

White, T. H. The Age of Scandal: An Excursion Through a Minor Period

The Age of Scandal: An Excursion Through a Minor Period 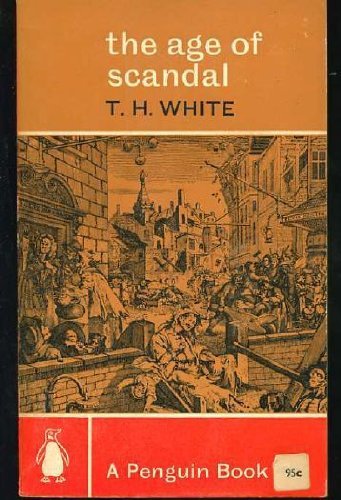 "Between the Classical and the Romantic movements...there existed this other age, which was one of peculiar flavour," writes T.H. White, author of the classic children's novel The Sword in the Stone and numerous other tales of Arthurian bravery. In The Age of Scandal, first published in 1950, White focuses on the period in late 18th-century England that followed the Age of Reason--a period characterized by dilettantism, material comfort, and eccentricity. The literary sway of Swift, Pope, and Dr. Johnson had by then given way to a more aristocratic set of literati, of whom Horace Walpole, writing from the house he had christened Strawberry Hill, was the most splendid and eloquent example. Walpole and his contemporaries "were among the first people in England to be apprehended as personalities," writes White. "Eccentric, individual, sentimental, dramatic, [and] tearful," they were lovers of gossip, fashion, and exhibitionistic behavior. Among the most colorful figures of the age were Selwyn, a famed execution-goer; Beckford, who built an astonishing tower at Fronthill; and Joanna Southcott, remembered for her shocking announcement that she would give birth to the new Messiah.
Based on writings by Horace Walpole and other literate recorders of the age, T.H. White has constructed a "little scrapbook of a nostalgic Tory." Here is the fascinating record of another period of literary history by one of the best-loved writers of our own. White describes the eccentricities of the 18th-century Royal Family, the fashions of the nobility--the powdering of wigs, eating and drinking, medicine, birthday parties and theater-going, and English pronunciation; attitudes toward religion and sport; and, above all, the outgageous gossip that circulated in literary circles. A witty, idiosyncratic, audacious portrait of an aristocracy on the wane, The Age of Scandal stands as an entertaining, authoritative description of the late 18th-century English literati.

About the Author:
T.H. White is the author of The Once and Future King, which includes The Sword and the Stone and Mistress Masham's Repose, and the translator of The Book of Beasts, a 12th-century Latin bestiary.

THE AGE OF SCANDAL (OXFORD PAPER