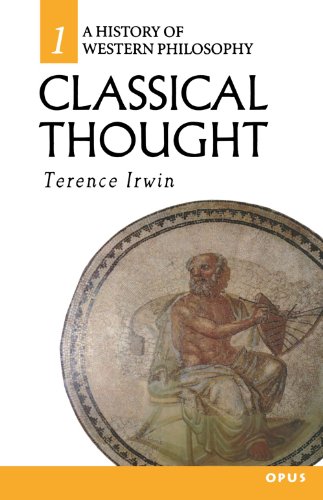 Spanning over a thousand years from Homer to Saint Augustine, Classical Thought encompasses a vast range of material in succinct style, while remaining clear and lucid even to those with no philosophical or Classical background

The major philosophers and philosophical schools are examined―-the Presocratics, Socrates, Plato, Aristotle, Stoicism, Epicureanism, Neoplatonism; but other important thinkers, such as Greek tragedians, historians, medical writers, and early Christian writers, are also discussed. The emphasis is naturally on questions of philosophical interest (although the literary and historical background to Classical philosophy is not ignored), and again the scope is broad―-ethics, the theory of knowledge, philosophy of mind, philosophical theology. All this is presented in a fully integrated, highly readable text which covers may of the most important areas of ancient thought and in which stress is laid on the variety and continuity of philosophical thinking after Aristotle.

an exciting, and rigorous, introduction to the subject which is a delight (Greece and Rome)

a fine volume, a coherent history of Classical thought (Polis)

Terence Irwin is Professor of Philosophy at Cornell University