Articoli correlati a Verdi: A Biography 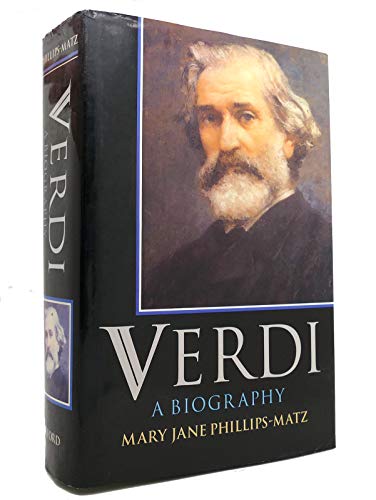 On October 9, 1813, in the small town of Roncole, Italy, a baby by the name of Giuseppe Verdi was born. Little did his parents know that this child, born in the auspicious week of the Feast of San Donnino, would grow up to be not only a national hero of Italy, but also one of the most successful composers of all time. Many books have been written about Verdi's music, yet few have sufficiently covered Verdi the man. Now, in Verdi: A Biography Mary Jane Phillips-Matz brings us the result of more than thirty years' research on the life of this colossus of Italy.
Drawing on numerous original documents provided by Verdi's descendants, the Carrara-Verdi family, this long awaited biography presents a reexamination of Verdi's life not only as a composer, but as a philanthropist and son of Italy. Matz places Verdi against a backdrop of a century of fierce Italian nationalism that dictated that not only musical, but political considerations permeate his life and work. As Phillips-Matz writes, in Verdi's music, in the patriotic phrases of his librettos, "nationalism found a voice that aroused Italians to the cause of the Patria." In fact, Verdi's stature as a cultural icon rose to such heights that in 1861, he was pressured to serve on the First Parliament of Italy. As his close friend Carlos Cavour wrote, Verdi's membership would lend great dignity to the Parliament both in and beyond Italy and thus further the efforts of the national party in its fight for independence.
Here too is a glimpse into the personal life of Verdi--his turbulent relationships with his friends and family, his dedication to his music, his passion for his country. In defense of his second wife, former soprano Giuseppina Strepponi--shunned by his family for her tarnished reputation--Verdi obtained a legal separation from his parents and for a time withdrew from public life to ensure their privacy. In protest over the Teatro La Fenice's poor choice of a soprano for La Traviata (1853), Verdi threatened to defect from the project ("I have no faith whatsoever that it will succeed, and--on the contrary--it will be a complete fiasco"). And in the midst of the Austro-Prussian war of 1866, in which the very freedom of Italy was at stake, Verdi, objecting to France's support of Austria, asked to be released from his contract to finish Don Carlos for the Paris Opera (the opera house, however, did not think war a good enough excuse).
Upon his death in 1901 there were scenes of national mourning for the man whose actions had become a model, and music an inspiration to all of Italy. With an eloquent foreword by Andrew Porter, Verdi: A Biography brilliantly illuminates the life of the composer, patriot, and philanthropist who not only created the operas that would prosper generations after the artist, but who also emboldened the cultural pride of a country fighting for its freedom.

About the Author
Mary Jane Phillips-Matz is Cofounder and Executive Board Member of the American Institute for Verdi Studies at New York University.