Articoli correlati a Fiddle Time Scales 2: Musicianship and technique through... 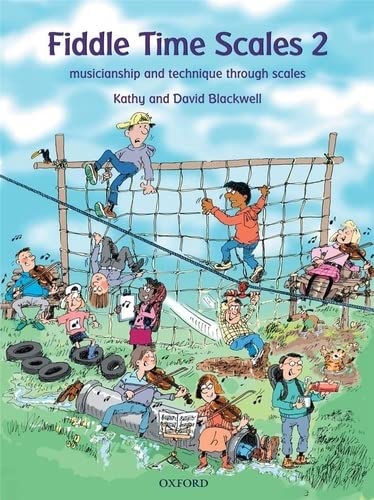 Fiddle Time Scales 2 has been revised to reflect the syllabus at ABRSM grade 3 and part of grade 4, and is an ideal companion to Fiddle Time Sprinters.

Kathy Blackwell, B. Mus. (Hons.), LTCL, LGSM, studied music at Edinburgh University and continued with post-graduate studies in music at the University of Oxford. Kathy is a string teacher with many years experience of teaching violin and viola. She developed her teaching ideas at the coalface in both Music Services and in private practice, working with groups large and small and in one-to-one lessons. She was a strings consultant for the ABRSM Music Medals initiative, a new assessment specifically designed for students taught in groups, and a contributor to the accompanying book All together! Teaching Music in Groups (ABRSM, 2004). Her teaching experience has led her to co-author Fiddle, Viola, and Cello Time, published by Oxford University Press, with her husband, David. Kathy and David have presented workshops in the UK, Australia, Hong Kong, and Singapore. David Blackwell studied music at Edinburgh University, after which he pursued a career in music publishing, first at ABRSM and then at Oxford University Press. He is co-editor of OUP's In the Mood: 17 Jazz Classics for Choirs and Carols for Choirs 5, and has published a number of single choral arrangements. He is co-writer with his wife Kathy of OUP's award-winning string series, Fiddle, Viola, Cello Time, and String Time, which have twice won the MIA award for Best Educational Publication. He now works as a freelance music editor, composer and arranger. In 2017 Kathy and David Blackwell received two awards: from ESTA UK in recognition of their exceptional services to string teaching, and from the Oxfordshire Music Education Partnership for significant contribution to music education in Oxfordshire and beyond.