Articoli correlati a Hitler's Army: Soldiers, Nazis, and War in the...

Hitler's Army: Soldiers, Nazis, and War in the Third Reich 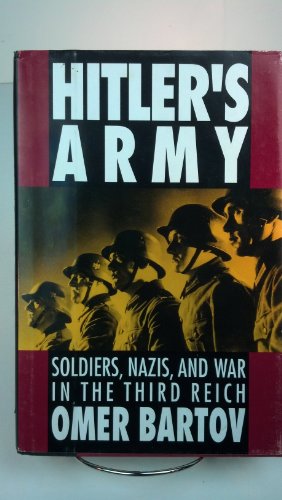 As the Cold War followed on the heels of the Second World War, as the Nuremburg Trials faded in the shadow of the Iron Curtain, both the Germans and te West were quick to accpt the idea that Hitler's army had been no SS, no Gestapo, that it was a professional force little touched by Nazi politics. But in this compelling account Omer Bartov reveals a very different history, as he probes the experience of the average soldier to show just how thoroughly Nazi ideology permeated the army.
In Hitler's Army, Bartov focuses on the titanic struggle between Germany and the Soviet Union--where the vast majority of German troops fought--to show how the savagery of war reshaped the army in Hitler's image. Both brutalized and brutalizing, these soldiers needed to see their bitter sacrifices as noble patriotism and to justify their own atrocities by seeing their victims as subhuman. In the unprecedented ferocity and catastrophic losses of the Eastrn front, he writes, soldiers embraced the idea that the war was a defense of civilization against Jewish/Bolshevik barbarism, a war of racial survival to be waged at all costs. Bartov descibes the incredible scale and destruction of the invasion of Russia in horrific detail. Even in the first months--often depicted as a time of easy victories--undermanned and ill-equipped Geman units were stretched to the breaking point by vast distances and bitter Soviet resistance. Facing scarce supplies and enormous casualties, the average soldier sank to ta a primitive level of existence, re-experiencing the trench warfare of World War I under the most extreme weather conditions imaginable; the fighting itself was savage, and massacrs of prisoners were common. Troops looted food and supplies from civilians with wild abandon; they mercilessly wiped out villages suspected of aiding partisans. Incredible losses led to recruits being thrown together in units that once had been filled with men from the same communities, making Nazi ideology even more important as a binding force. And they were further brutalized by a military justice system that executed almost 15,000 German soldiers during the war. Bartov goes on to explore letters, diaries, military reports, and other sources, showing how widespread Hitler's views became among common fighting men--men who grew up, he reminds us, under the Nazi regime. In the end, they truly became Hitler's army.
In six years of warfare, the vast majority of German men passed through the Wehrmacht and almost every family had a relative who fought in the East. Bartov's powerful new account of how deeply Nazi ideology penetrated the army sheds new light on how deeply it penetrated the nation. Hitler's Army makes an important correction not merely to the historical record but to how we see the world today.

About the Author:
Omer Bartov is Junior Fellow with the Society of Fellows, Harvard University, and is the author ofThe Eastern Front, 1941-1945.

1. Hitler's Army: Soldiers, Nazis, and War in the Third Reich

2. Hitler's Army: Soldiers, Nazis, and War in the Third Reich

3. Hitler's Army: Soldiers, Nazis, and War in the Third Reich

4. Hitler's Army: Soldiers, Nazis, and War in the Third Reich