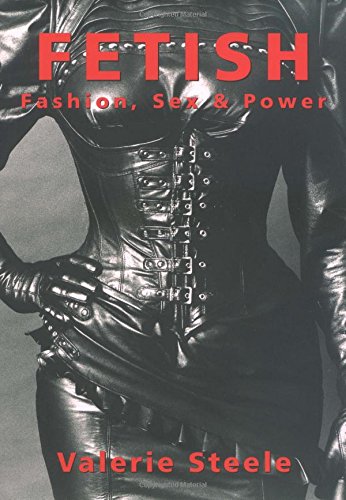 The word fetishism evokes images of `kinky' sex, involving an abnormal attraction to certain articles of clothing, such as black leather boots, or body parts, like legs and buttocks. Yet the fetish is in fashion - on the catwalks and in the streets. Leather gear, body piercing, second-skin rubber, even the corset, are back; no longer restricted to sexual subcultures but worn by `club kids' and socialites alike. While fetishism has traditionally been regarded by pyschologists as a `perversion', modern fashion has increasingly embraced characteristic fetish-items such as the spiked high-heel shoe.

Steele brilliantly charts the boundaries of the `normal' and the `perverse', and shows how even the most bizarre-seeming clothing fetishes enable their wearers (male and female, gay and straight) to use clothing to express their social and sexual identities.

Steele is a fun and erudite companion as she traces the drift of subcultural sexual codes into mainstream film, TV and magazines. (Susan Jeffreys, New Statesman & Society)

a very sensible book on what tends to be a very silly subject ... In an area where feminists, gay activists, pseudo-intellectuals and outrageous egos strut and pout, she proves a stern mistress ... no-nonsense approach to fetishism. (The Times Higher Education Supplement)

the book delves deep into the history of fetishism and explains how it is now an increasingly ordinary part of people's lives (Catherine Norton, Cardiff Western Mail)