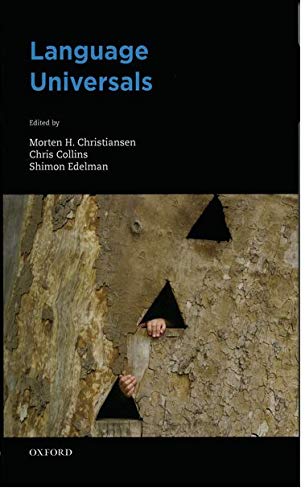 Languages differ from one another in bewildering and seemingly arbitrary ways. For example, in English, the verb precedes the direct object ('understand the proof'), but in Japanese, the direct object comes first. In some languages, such as Mohawk, it is not even possible to establish a basic word order. Nonetheless, languages do share certain regularities in how they are structured and used. The exact nature and extent of these "language universals" has been the focus of much research and is one of the central explanatory goals in the language sciences.

During the past 50 years, there has been tremendous progress, a few major conceptual revolutions, and even the emergence of entirely new fields. The wealth of findings and theories offered by the various language-science disciplines has made it more important than ever to work toward an integrated understanding of the nature of human language universals. This book is the first to examine language universals from a cross-disciplinary perspective. It provides new insights into long standing questions such as: What exactly defines the human capacity for language? Are there universal properties of human languages and, if so, what are they? Can all language universals be explained in the same way, or do some universals require different kinds of explanations from others? LanguageUniversals is unique in starting with the assumption that the best way to approach these and related questions is through a dialogue between a wide range of disciplines, including linguistics, cognitive neuroscience, philosophy, computer science and biology.

Morten H. Christiansen received his PhD in Cognitive Science from the University of Edinburgh in 1995. He is an Associate Professor in the Department of Psychology and Co-Director of the Cognitive Science Program at Cornell University. His research focuses on the interaction of biological and environmental constraints in the processing, acquisition and evolution of language, which he approaches using a variety of methodologies, including computational modeling, corpus analyses, psycholinguistic experimentation, neurophysiological recordings, and molecular genetics. He has edited volumes on Connectionist Psycholinguistics (Ablex, with Nick Chater) and Language Evolution (Oxford, with Simon Kirby). He is currently working on a monograph, Creating Language: Towards a Unified Framework for Language Processing, Acquisition and Evolution (Oxford, with Nick Chater).

Christopher T. Collins is a professor in the Department of Linguistics at New York University. He received a Ph.D. in Linguistics from the Massachusetts Institute of Technology in 1993. His research interests are comparative syntax and the syntax African languages. He approaches the issue of language universals through the indepth study of various African languages, including Ewe and most recently N|uu, an endangered Khoisan language of South Africa.

Shimon Edelman is Professor of Psychology at Cornell University, where he is also member in the graduate fields of Computer Science, Information Science, and Cognitive Science. His research interests include computational, behavioral, and neurobiological aspects of vision, as well as language acquisition and processing and computational linguistics. His latest book Computing the Mind: How the Mind Really Works will be published by Oxford University Press in 2008.