Articoli correlati a Reification: A New Look At An Old Idea

Reification: A New Look At An Old Idea 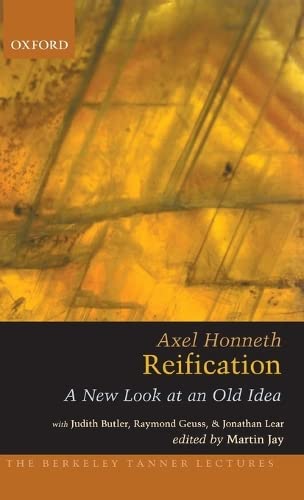 In the early 20th century, Marxist theory was enriched and rejuvenated by adopting the concept of reification, introduced by the Hungarian theorist Georg Lukács to identify and denounce the transformation of historical processes into ahistorical entities, human actions into things that seemed part of an immutable "second nature." For a variety of reasons, both theoretical and practical, the hopes placed in de-reification as a tool of revolutionary emancipation proved vain. In these original and imaginative essays, delivered as the Tanner Lectures at the University of California, Berkeley in 2005, the distinguished third-generation Frankfurt School philosopher Axel Honneth attempts to rescue the concept of reification by recasting it in terms of the philosophy of recognition he has been developing over the past two decades. Three distinguished political and social theorists: Judith Butler, Raymond Geuss, and Jonathan Lear, respond with hard questions about the central anthropological premise of his argument, the assumption that prior to cognition there is a fundamental experience of intersubjective recognition that can provide a normative standard by which current social relations can be judged wanted. Honneth listens carefully to their criticism and provides a powerful defense of his position.

...these lectures draw on an impressively wide and varied range of ideas. They are continually engaging, thought provoking and - a rare blessing - a pleasure to read. Without doubt they will stimulate lively discussion of these important issues... (Sean Sayers, Mind)

Axel Honneth was born in 1949 and studied Philsophy, Sociology and German Literature at Bonn, Bochum, and Berlin. After having been Professor at the University of Konstanz and the FU Berlin, he is now Professor of Social Philosophy at the Johann Wolfgang Goethe-University and Director of the Institute for Social Research in Frankurt/Main.

1. Reification: A New Look At An Old Idea (The Berkeley Tanner Lectures)

2. Reification: A New Look At An Old Idea (The Berkeley Tanner Lectures)