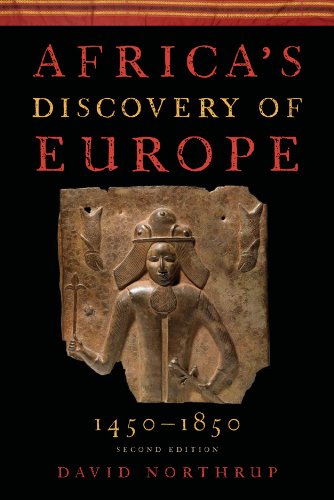 Brilliantly written and thoroughly engaging, the new edition of this groundbreaking book examines the full range of African-European encounters from an unfamiliar African perspective rather than from the customary European one. Updated to include new research, maps, and illustrations, Africa's Discovery of Europe, 1450-1850, Second Edition, concludes with an expanded epilogue that extends the themes of African-European commercial and cultural interaction to the present day. By featuring vivid life stories of individual Africans and drawing upon their many recorded sentiments, David Northrup presents African perspectives that persuasively challenge stereotypes about African-European relations as they unfolded in Africa, Europe, and the Atlantic world between 1450 and 1850.
Acclaimed by students in classroom settings ranging from secondary schools to graduate colloquia, the text features thematically organized chapters that explore first impressions, religion and politics, commerce and culture, imported goods and technology, the Middle Passage, and Africans in Europe. In addition, Northrup offers a thoughtful examination of Africans' relations--intellectual, commercial, cultural, and sexual--with Europeans, tracing how the patterns of behavior that emerged from these encounters shaped pre-colonial Africa. The book concludes with an examination of the roles of race, class, and culture in early modern times, pointing out which themes in Africa's continuing discovery of Europe after 1850 were similar to earlier patterns, and why other themes were different.
Brief, inexpensive, and accessible, the second edition of Africa's Discovery of Europe offers an insightful look at the tumultuous and enduring relations between these two continents.

David Northrup is Professor of History at Boston College.