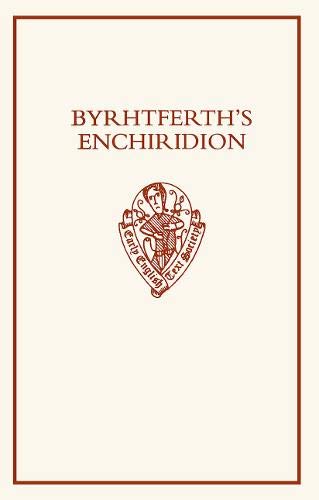 Byrhtferth of Ramsey was one of the outstanding scholars produced by the late Anglo-Saxon church; his principal work, the Enchiridion, completed in the year 1011, is a handbook designed to explain the complexities of medieval date-reckoning - called computus. The Enchiridion includes digressions on metrics, rhetoric, astronomy, and arithmology.

Never before adequately edited, this new edition of a neglected late Old English scientific text throws new light on our knowledge of eleventh-century scientific scholarship. The text is accompanied by a full Introduction, apparatus criticus and facing modern English translation, detailed Commentary, and an appendix containing the Latin computus which the Enchiridion was designed to elucidate, together with glossaries of the Old English and difficult Latin words occurring in the Enchiridion itself.

Baker and Lapidge do more than correct and re-edit the text: they also characterise the scholarly context within which the work was written illuminate Byrhtferth's career, provide clear evidence in support of Ramsey's position as a major centre of scholarship, and explain for us the esoteric traditions of the science of computus and medieval arithmology. (Joyce Hill, University of Leeds, Early Medieval Europe, Volume 6 Number 1 1997)

Baker and Lapidge do more than correct and re-edit the text: they also characterise the scholarly context within which the work was written ... In their preface the editors comment that 'Byrhtferth's intention in composing his Enchiridion was to make ecclesiastical computus and arithmology - subjects which are at best difficult and at worst impenetrable - comprehensible to a diverse audience', and they express the hope that, in some measure, their new edition will have assisted him in achieving his aim. They have succeeded triumphantly. (Joyce Hill, University of Leeds, Early Medieval Europe 1997 6)

This work of heroic erudition, replacing Samuel Crawford's 1929 edition, has been worth the wait ... this edition will surely become and remain a standard source for information on Anglo-Saxon numeracy. (Speculum - A Journal of Medieval Studies)