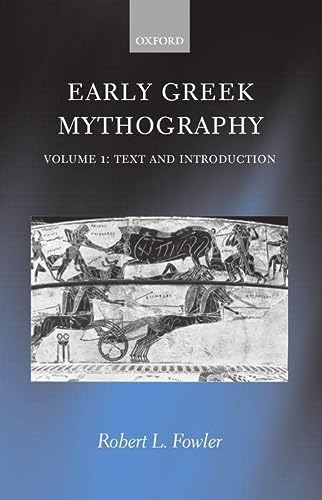 This volume collects together the scattered quotations of the Greek writers of the sixth to the fourth centuries BC who first recorded in prose the tales of Greek mythology (the 'mythographers'). Volume 1 is an edition of the texts, whilst Volume 2, which provides the commentary, will follow in a couple of years' time.

Here Professor Fowler presents new texts of Hekataios' Genealogies, Akousilaos, Pherekydes of Athens, the mythographical works of Hellanikos, Andron of Halikarnassos, pseudo-Epimenides, Herodoros, and many other ancient Greek mythographers. The texts are based on a fresh examination of manuscripts and papyri, particularly of the minor scholia to Homer. Read together for the first time, these texts represent an important and understudied genre of early Greek literature.

... a well organized and very useful work. We expect with great interest the publishing of the commentaries in the second volume. (Gnomon)

Some editorial practices make the work very useful and easy to use. The authors are presented in alphabetical order, the typography is clear ... the critical apparatus follows the fragment in the brief ones and appears as a footnote in the longer ones. (Gnomon)

Fowler offers us an edition that has never been proposed before: the fragments of Greek mythography from its beginnings to the early fourth century. (Gnomon)

... user-friendly ... I cannot emphasize too strongly my admiration for Fowler's thoroughness and consummate scholarship. (Hermathena)