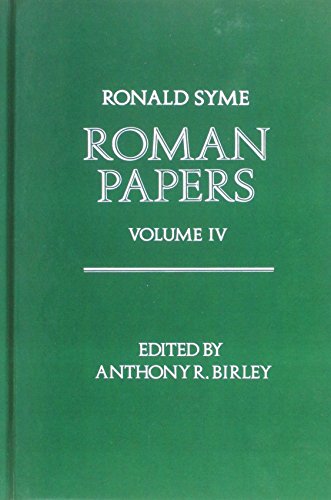 Volumes Iv and V of Roman Papers contain forty-two of Sir Ronald Syme's papers composed between 1981 and 1985. A good many deal with the younger Pliny and Tacitus; other ancient authors examined here include Strabo, the elder Pliny, Statius, Quintilian, and Arrian. Several papers focus on the Spanish provinces and on the Greek east. New light is shed on the 'Hispano-Narbonensian nexus' that emerged under the Flavians and was to form the Antonine dynasty, on the emperor Hadrian and his Antonine successors, and on the usurper Avidius Cassius. There is an Index of Persons for the two volumes at the end of Roman Papers V.

`These two last volumes of Roman Papers are once again a proof of Syme's enormous culture, deep knowledge of human nature, command of every kind of source and power of interrelating and interpreting things. It is amazing the number of Roman characters that Syme knew. His learning is immense. Another feature is his formidable analysis of the nature of power.' Atomus

'A number of articles from fairly inaccessible works have been included. For this reason alone these volumes deserve to be read. There is, probably, something for everybody in these volumes. It is to be hoped that he will continue the work with Volume VI.'Brian W. Jones, University of Queensland, Journal of Australasian Universities Language and Literature Association