Articoli correlati a Anatolia: Volume II: The Rise of the Church: 002

Mitchell, Stephen Anatolia: Volume II: The Rise of the Church: 002

Anatolia: Volume II: The Rise of the Church: 002 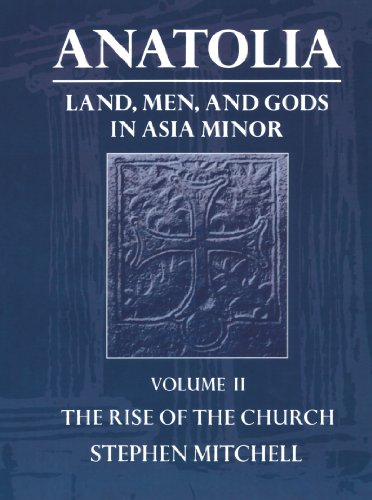 This is the first comprehensive study of the history of Asia Minor in antiquity to be written for nearly fifty years and the first attempt to treat Anatolian history as a whole over the millennium from the time of Alexander the Great to tbe hey-day of the Byzantine Empire. This second volume examines the rise of Christianity: Anatolian religious beliefs and practices provides fertile ground where both Jewish and Christian communities set down early roots; by the mid third century AD much of Anatolia was Christian, and Christian beliefs and practices shaped Anatolian history in Late Antiquity as decisively as the conditions of imperial rule had done in the high Roman Empire.
Two relationships dominated every aspect of Asia Minor's history: that of the people to the land, and that of men to the gods. An enormous quantity of information derived from written sources, archaeological remains, inscriptions and coins make it possible to explore these relationships at a level of detail which is hardly possible for anyother part of the ancient world. Both themes have a significance which reached far beyond the boundaries of Anatolia.

'an important venture in handling and presenting all kinds of information' 'This is a very important book.' 'Mitchell has been admirably audacious in making clear his own views on a wide range of topics...and there will be no shortage of scholars to take issue with him.' 'Mitchell lays out, with courage and generosity, his wide experience of the physical realities of Anatolia, presented in a format which should enable - and force - other historians to grasp their relevance.'Times Higher Education Supplement

'In recent decades, Stephen Mitchell has emerged as one of the best of the younger generation of British interpreters of Turkey's past. Mitchell's work is far more interesting to read, yet equipped with documentation almost as thorough as Magie's. He provides a fresh and vivid review of the social, economic and religious history of Asia Minor.'Times Literary Supplement

magisterial survey of the history and archaeology of Turkey during the classical period ... he writes with assurance about the physical setting of these forgotten communities ... This formidably detailed but utterly lucid study of Roman Anatolia at least means our generation has an immeasurably fuller perspective on the problem than was available to Edward Gibbon. (David Barchard, The Tablet)

This is an important book ... there is far more in this densely written, thoughtful, and extremely stimulating book than can be mentioned in a review. (J.H.W.G. Liebeschuetz, Journal of Theological Studies, Vol. 46, No. 1, April 1995)

excellent work...It is hard to do justice to the wide scope of this work and the immense learning which it displays and organizes into a coherent picture...throughout the work, M. pays careful attention to the physical environment, as evidentin the clear maps and well-chosen illustrations. Reflection...is stimulated in innumerable ways by the wealth of information in this work. It embodies all the latest research, shows the influence of all the masters of the field, most notably Louis Robert, and allows a vast mass of virtually inaccessible information to be used and understood. All students of antiquity will learn much from these volumes, which will long stand as a monumental regional study. (Clive Foss, University of Massachusetts)

Stephen Mitchell is at University College of Swansea.