Articoli correlati a Roman Monody, Cantata and Opera from the Circles around... 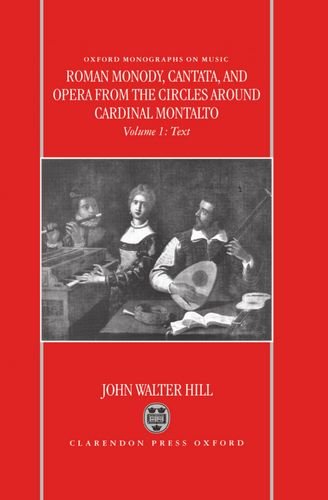 The subject of this book arises from the author's discovery or identification of ten important manuscripts of early seventeenth-century Italian solo song (monody) previously unexplored by modern scholars. Almost by coincidence, the author's research shows that all ten manuscripts preserve portions of Roman repertoire largely by composers associated with the most significant music patron of the period, Alessandro Peretti, Cardinal montalto. Through extensive archival documentation, Cardinal Montalto's patronage of music is set in the broader context of the network of political, economic, and cultural clientela to which Montalto belonged. Hill documents new explanations of the origin of monody, focusing on the roles of Naples and rome and their unwritten traditions. A thorough analysis of the repertoire itself reveals and explains distinct subgenres of monody that have not previously been distinguished. Music for Battista Guarini's last stage work and for the first Roman opera brought forth. Thus, identified, examined, analysed and placed in context, this repertoire and its genesis call forth a fundamental revision of existing narratives and explanations of the early Baroque vocal music in Rome and the rise of the Italian chamber cantata, next to opera, the most significant musical genre of the seventeenth century.

Roman Monody ... is the first book devoted to a major music patron in late Renaissance and early Baroque Rome as well as the first large-scale study devoted by an English-speaking scholar to musical patronage in earlier times which takes into account a recent debate on this intriguing subject matter. (Early Music History, Vol 18)

Hill's discoveries are important, not simply for adding to the solo song repertory, but for provoking us to recondider the years around 1600. (Graham Dixon, Early Music Today)

The editor has discovered a new group of sources; he explains their context, analyses the musical styles, and edits them so that they can be studied and performed. He is sensitive to the difference between notation and performance ... Vol. 2 is a marvellous anthology: 422 closely-packed pages of 164 mostly-unpublished songs and duets. (Early Music Review - 35 - November 1997)