Articoli correlati a The Short Oxford History of English Literature 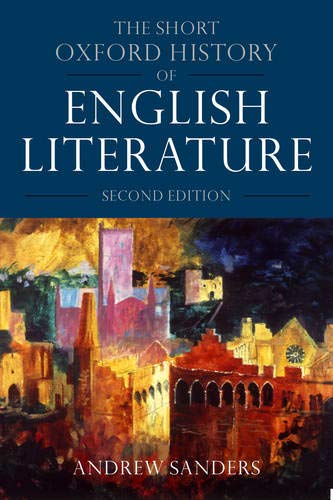 Poet's Corner in Westminster Abbey (honoring such literary greats as Geoffrey Chaucer, Ben Jonson, John Dryden, and Charles Dickens) mirrors the conscious efforts of writers to create the British literary tradition--the physical expression of the emerging canon. In The Short Oxford History of English Literature, Revised Edition, Andrew Sanders conducts us on a tour through the living past behind the stone effigies of Poet's Corner, capturing the vast history of the literature of the British isles in a single, fascinating narrative. Starting with the early Anglo-Saxon period, he ranges up to the present, with individual chapters on Old and Middle English literature, the Renaissance, Shakespeare, the seventeenth and eighteenth centuries, the Romantics, Victorian and Edwardian literature, modernism, and post-war writing. Throughout, Sanders combines concise analyses of individual works and authors with an overarching sense of how they interacted in a single literary tradition. Focusing on the dramas of Shakespeare, for example, he reminds us of the "symbiotic relationship" between the Bard and his rivals, especially Marlowe. He goes on the examine the impact of Scottish writers and philosophers, the rich traditions of Irish literature, and the works of Welsh authors. And he brings his analysis up to the post-modern present, looking at such writers as Seamus Heaney and Angela Carter, as well as examining the impact on literature of contemporary political, social, and economic developments. This revised edition includes for the first time detailed, chapter-by-chapter guidance on further reading.
The literature of Britain stands as an inspiration to literary traditions in America and elsewhere. The Short Oxford History of English Literature provides a remarkably concise account of this rich past, offering food for thought and an even deeper enjoyment of the great works.

About the Author:
Andrew Sanders is Professor of English Studies at the University of Durham and the editor of a number of World's Classics editions, including Dickens's A Tale of Two Cities and Thackeray's Barry Lyndon.