Articoli correlati a A Dictionary of Astronomy

A Dictionary of Astronomy

A Dictionary of Astronomy 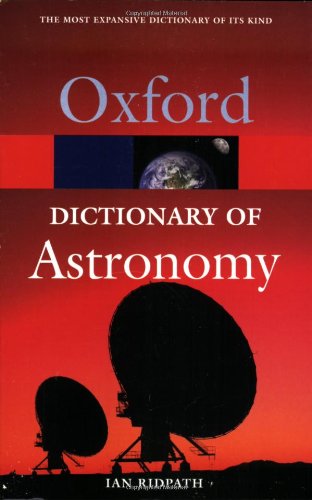 The second edition of this established dictionary contains over 4,200 up-to-date entries on all aspects of astronomy. Edited by renowned author and broadcaster Ian Ridpath, with the help of over 20 expert contributors, it covers everything from space exploration and the equipment involved, to astrophysics, cosmology, and the concept of time. The dictionary also features biographical entries on eminent astronomers, as well as worldwide coverage of observatories and telescopes. Appendices include tables of Apollo lunar landing missions and the constellations. Entries are supported by numerous tables and diagrams. The text has been fully revised and updated for the second edition, and includes information on new space missions, and ones that have come to fruition (such as the Huygens Probe). It also boasts entry-level web links and highlighted entries on topics sich as the Big Bang theory, black holes, galaxy evolution, and SETI. An invaluable reference source for students, professionals, amateur astronomers, and for space enthusiasts.

this book is rich in peculiarities for the interested observer. (The Independent)

Ian Ridpath has been a full-time writer, broadcaster, and lecturer on astronomy and space since 1972. A Fellow of the Royal Astronomical Society, he has written numerous trade books on aspects of astronomy, including the longest-standing star atlas in print.

1. A Dictionary of Astronomy Ridpath, Ian