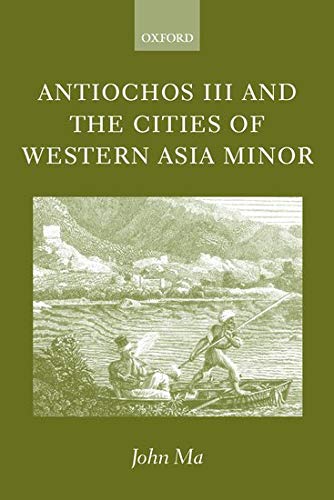 This important and wide-ranging work examines a test case for the relationship between the polis and the Hellenistic empire focusing specifically on the interaction between Antiochos III and the cities of Western Asia Minor (226-188 BC). Such a study is possible thanks to a rich epigraphical documentation which has been reproduced extensively and translated in an appendix to this book. Dr Ma approaches this material from a variety of angles: narrative history, structural analyses of imperial power, and analyses of the functions played by language and stereotype in the interaction between rulers and ruled. The result is to further a nuanced appreciation of the relation between the Hellenistic king and the Hellenistic polis by drawing attention to the power of the Hellenistic empires, to the capacity of political language to modify power relations, and to the efforts of the Hellenistic polis to preserve its sense of identity and civic pride, if not its political independence. This paperback edition includes a new preface and a section of addenda.

This is an engrossing book to read, very dense, beautifully written and enormously rewarding for anyone interested in how language can shape power relations. (Paola Ceccarelli, Universitŕ dell'Aquila, Italy)

an absorbing and thought-provoking study, which will be essential reading for all serious students of the Hellenistic Near East. (G. R. G. Hambly, Choice)

The professional Hellenistic historian or the epigraphist consequently is likely to find this study most enthralling -and it will prove highly rewarding. (Times Literary Supplement)