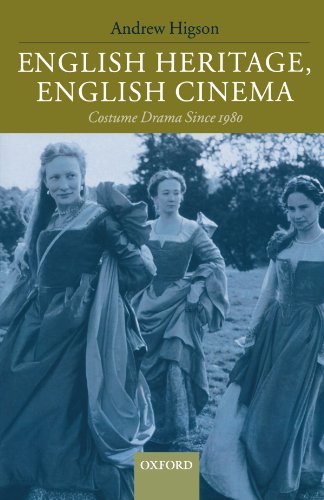 Costume dramas such as Chariots of Fire, A Room with a View, Sense and Sensibility, and Shakespeare in Love were vital to the success of British cinema in the 1980s and 1990s. This is the first book-length study of these important films, and the debate about their politics and their meanings, and about their relationship to the heritage industry. It maps the extent of the production trend, and looks in detail at the commercial context in which the films were funded, marketed and exhibited, in both the UK and the USA. There are also extensive case studies of two key films, Howard's End and Elizabeth.

Review from other book by this authorWaving the Flag represents a valuable addition to British film writing which pulls together and adds to his earlier discussions ... The case-studies are relatively self-contained and could, I imagine, be profitably read in isolation. Indeed, the details accumulated and the issues raised in each case aree so extensive that they characteristically exceed the strict requirements of the developing argument ... an impressive piece of scholarly research which adds considerably to our understanding of British film history. (John Hill, Screen, Vol. 37, No. 1, Spring '96)

Higson presents a fascinating and challenging examination of the connections between cinema and culture. I fully believe this book will be valuable for all those concerned with how the cultural analysis of films relates to the films' economic context. Higson writes in a clear and accessible manner ... his knowledge of production history,grasp of film aesthetics, and insightful interpretations make the connections between economics and art simply fascinating. (Lester D. Friedman, Film Quarterly, Vol. 49, No. 4, Summer '96)

Andrew Higson has taught Film Studies at Leicester and Sunderland Polytechnics. He joined the University of East Anglia in 1986, and was made a Professor of Film Studies in 2000. He was chair of the Film Studies sector at the University from 1991 to 1998, and Dean of the School of English and American Studies from 2002 to 2005. He has published widely on British cinema, on Film Europe, and on national cinema. He is co-director of the British Cinema History Research Project, funded by the Arts and Humanities Research Board, and based at the University of East Anglia.

Descrizione libro Paperback. Condizione: New. New. Language: English. Brand new Book. The costume drama was one of the important production trends in British cinema during the 1980s and 1990s. Films such as "Chariots of Fire", "A Room with a View", "Howard's End", "Sense and Sensibility", "Elizabeth", and "Shakespeare in Love" won numerous accolades, received extensive critical acclaim, and achieved considerable box-office success, both in the UK and overseas. Since the late 1980s, there has been much debate about these films, about their politics and their meanings, and about their relationship to the heritage industry. In this text, the author moves the debate on heritage cinema in other directions. First, he demonstrates that there were many more "British" costume dramas than have usually been taken into account in discussions of heritage cinema, and describes the typical subject matter, themes, and stylistic characteristics of these films. Secondly, he explores the major concerns of the critical debate about heritage cinema, arguing that the ambivalence of the films themselves and the richness of the reception process necessarily produces a range of often incompatible interpretations of the same films. Codice articolo AAC9780199259021

Descrizione libro Paperback / softback. Condizione: New. New copy - Usually dispatched within 4 working days. This title discusses English heritage on film. It argues that the ambivalence of the films themselves and the richness of the reception process necessarily produces a range of often incompatible interpretations of the same films. Codice articolo B9780199259021