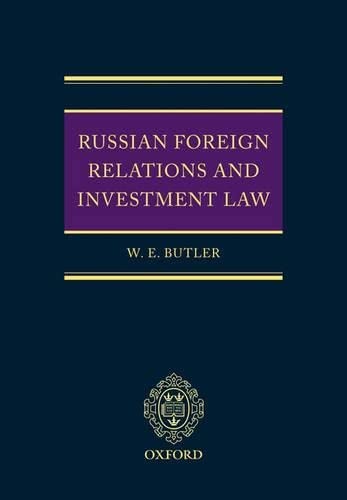 Russian Foreign Relations and Investment Law is the fourth volume in OUP's Russian law mini-series and is the first comprehensive study of Russian foreign relations law which examines the legal rights of, and limitations on, foreigners in Russia. Increasing investment in Russia makes this an ideal time to publish a further volume with the focus on this area.

With the emphasis placed on the commercial investor, Butler provides a thorough guide from both perspectives of the foreigner trading into Russia and the foreign investor exporting from within Russia. Through twelve logical chapters Butler covers areas such as foreign trade law, foreign investment law, different types of foreigners and thier rights, aspects of employment law, civil law rights and duties, and general principles of international law all within the context of the Russian legal system.

This text is a welcome addition to the other titles in series:The Civil Code of the Russian Federation, Russian Company and Commercial Legislation and the second edition of Professor Butler's acclaimed general text Russian Law .

Professor Butleris a John Edward Fowler Distinguished Professor of Law, Dickinson School of Law, Pennsylvania State University and is the founder and Director of the Vinogradoff Institute, University College London. He is a part-time professor of Civil Law, Moscow State Legal Academy where he introduced the course on Comparative Law.

3. RUSSIAN FOREIGN RELATIONS AND IN