Articoli correlati a From Hindi to Urdu: A Social and Political History

Rahman, Dr Tariq From Hindi to Urdu: A Social and Political History

From Hindi to Urdu: A Social and Political History 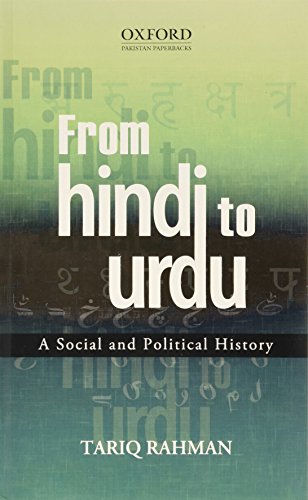 This book is the first of its kind on the socio-political history of Urdu. It analyses the historiography of the language-narratives about its names, linguistic ancestry, place of birth-and relates it to the politics of identity-construction among the Hindus and Muslims of India during the last two centuries. More importantly, a historical account of the use of Urdu in social domains such as employment, education, printing and publishing, radio, films and television etc. has been provided for the first time. These accounts are related to the expression of Hindu and Muslim identity-politics during the last two centuries. Evolution of Urdu from the language of the laity, both Hindus and Muslims, of the Indian subcontinent during the period between 15th-18th centuries to its standardization into two languages: Persianized Urdu and Sanskritized Hindi are highlighted here. The writer looks at narratives of the names, theories of genealogy and places of origin of the language in relation to the political imperatives of identity-politics of Hindus and Muslims during the nineteenth and twentieth centuries. In a nutshell, historiography is analyzed with reference to its political and ideological dimensions-and a fresh analysis regarding the linguistic history of Urdu is provided.

Tariq Rahman PhD is presently Dean, School of Liberal Arts and Social Sciences at the Beaconhouse National University, Lahore. He is also HEC Distinguished National Professor and Professor Emeritus at the National Institute of Pakistan Studies, Quaid-i-Azam University, Islamabad. Dr Rahman has been a guest professor in Denmark and Spain, and a Fulbright research scholar (1995-96) at the University of Texas at Austin, USA. He was also the first incumbent of the Pakistan Chair at University of California, Berkeley (2004-05). He has been a research fellow at the Oxford Centre of Islamic Studies and the South Asia Institute at the University of Heidelberg. He is the recipient of several awards: the Presidential Pride of Performance (1994), HEC Lifetime Achievement Award, the highly prestigious Humboldt Research Award (2012) from Germany, and the Sitara-i-Imtiaz in 2013. In 2014, he was awarded a DLitt by the University of Sheffield for all of his published research.