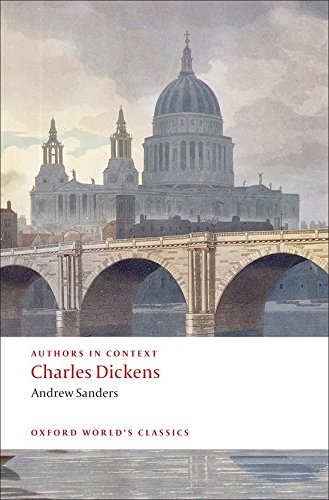 Authors in Context examines the work of major authors in relation to their own times and to the present day. Combining history with lively literary discussion, each volume provides comprehensive insight into texts in their context.

Charles Dickens was both a representative Victorian and an artist who is quintessentially a 'Post-Romantic'. He was the most popular author of his age and the one who most vividly reflected the contradictory impulses of Victorian society, its energy and invention as much as its social and political anomalies. This book explores Dickens's interest in the urban phenomenon which so marks nineteenth-century culture, and it looks at the vital interconnection between his life and his art. Like his character, David Copperfield, Dickens lived his life and pursued his career 'thoroughly in earnest', but he was also a great comic writer whose work resonates well beyond his own age and continues to be recontextualized on the stage, on film, and on television.

ABOUT THE SERIES: For over 100 years Oxford World's Classics has made available the widest range of literature from around the globe. Each affordable volume reflects Oxford's commitment to scholarship, providing the most accurate text plus a wealth of other valuable features, including expert introductions by leading authorities, helpful notes to clarify the text, up-to-date bibliographies for further study, and much more.

Andrew Sanders has edited David Copperfield and A Tale of Two Cities for OWC. He is the author of Dickens and the Spirit of the Age (1999) and The Short Oxford History of English Literature (1994, 2000). He was formerly Editor of The Dickensian.

Descrizione libro Paperback. Condizione: Very Good. The book has been read, but is in excellent condition. Pages are intact and not marred by notes or highlighting. The spine remains undamaged. Codice articolo GOR004145074

Descrizione libro Paperback. Condizione: Very Good. The book has been read, but is in excellent condition. Pages are intact and not marred by notes or highlighting. The spine remains undamaged. Codice articolo CIN000290520

Descrizione libro Oxford University Press, 2009. Paperback. Condizione: GOOD. Has little wear to the cover and pages. Contains some markings such as highlighting and writing. Supplemental materials are not guaranteed with any used book purchases. Codice articolo 0199556091_abe_gd

Descrizione libro Oxford University Press, 2009. Condizione: Good. A+ Customer service! Satisfaction Guaranteed! Book is in Used-Good condition. Pages and cover are clean and intact. Used items may not include supplementary materials such as CDs or access codes. May show signs of minor shelf wear and contain limited notes and highlighting. Codice articolo 0199556091-2-4