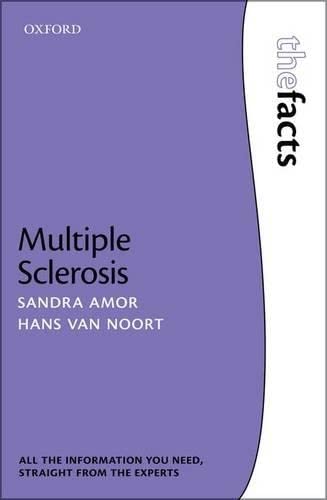 Multiple Sclerosis (MS) is thought to affect almost 2.5 million people worldwide. With the arrival of several new MS drugs and increased availability of information on the internet, many people are confronted by an overwhelming number of information sources about how best to manage their condition. This new book explains, in a clear and accessible way, what is currently known about MS. It provides an explanation of the disease process, symptoms, diagnosis, and how drugs and alternative approaches to disease management work. It also provides supplementary information on how lifestyle and diet changes may help.

Multiple Sclerosis: The Facts addresses the most frequently asked questions about MS, and provides answers in an easy-to-read and accessible format. The book is an invaluable resource for people with MS, and their families and health care workers will also find it a go-to guide to help understand the disease more clearly. This book will also be of interest to medical students and MS researchers.

Anybody who has MS, their families and health workers would find this book useful to update their knowledge and consolidate the latest information on treatments. (Nursing Times)

Sandra Amor obtained her PhD in Pathology at London University, UK in 1988, specialising in virus infections of the central nervous system. After her PhD she established a research group at St Thomas's Hospital examining how autoimmune responses to brain proteins are involved in multiple sclerosis. Her research expanded and after a few years in neurosciences at Imperial College she moved to the Netherlands where she became Head of Autoimmunity at a Research Institute in Rijswijk. In 2007, Sandra Amor moved her research back into human pathology at the Free University in Amsterdam. As Head of Multiple Sclerosis Research in the Pathology Department her group specialises in examining the very first steps in the formation of damage in MS brains. She also has a honorary position at Blizard Institute, Barts and The London Hospital, London UK. After obtaining his PhD in biochemistry at the University of Leiden in 1985, The Netherlands, and working at the research center of Hoffman La Roche in Nutley, NJ, Hans van Noort joined the research organisation TNO in the Netherlands. He started his multiple sclerosis research in 1992, which led him to the identification of the small heat shock protein alpha B-crystallin as a major myelin-associated target for human T cells. In 2008, he co-founded the biotechnology company Delta Crystallon BV and now leads it research efforts as chief scientific officer, aiming at the clinical development of alpha B-crystallin as a novel therapeutic protein for MS and other inflammatory disorders.