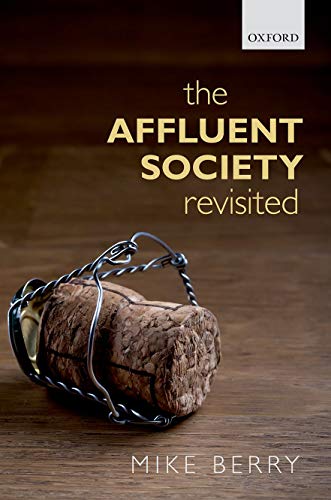 This book revisits John Kenneth Galbraith's classic text The Affluent Society in the context of the background to, and causes of, the global economic crisis that erupted in 2008. Each chapter takes a major theme of Galbraith's book, distils his arguments, and then discusses to what extent they cast light on current developments, both in developed economies and in the economics discipline. The themes include: inequality, insecurity, inflation, debt, consumer behaviour, financialization, the economic role of government ('social balance'), the power of ideas, the role of power in the economy, and the nature of the good society. It considers the current problems of capitalism and the huge challenges facing democratic governments in tackling them.

Written in non-technical language, this book is accessible to students of economics and the social sciences as well as to those who would have read The Affluent Society and the general reader interested in contemporary affairs and public policy.

Students of economic history will find this a particularly useful volume as it is written in an exceptionally readable manner.This volume makes an important contribution to the literature on the economic history of advanced capitalism and its effects on the distribution of wealth within Western democracies. I have no hesitation in recommending this text to anyone, whether or not they are familiar with economics, with an interest in recent economic history and/or in the effects of changing economic policies on the structure of societies. Furthermore, anyone seeking an overview of the causes and consequences of the GFC will find The Affluent Society Revisited a useful reference. (Jenny Chesters, Economic Record)

Mike Berrys retrospective on JKGs most famous book and its challenging propositions should be warmly welcomed. For people familiar with the original work, it combines a brisk walk down memory lane with a thought-provoking stroll back to the present. For newcomers to the field, it is a fine illustration of how political economy must engage with social concerns and matters of power and ethics. (Frank Stilwell, Journal of Australian Political Economy)

This is a stimulating book, and not just because it leads us back to Galbraith's orginial work. Berry, like Galbraith, reminds us that orthodox economics does not 'adequately explain the human condition' and so makes a less than reliable guide for public policy. (Peter Mares, Australian Book Review)

Galbraith wrote provocative works in an easy-to-read style. They werent radical but they were controversial poking at conventional wisdom, a phrase he coined.Berry follows in his footsteps. (Anitra Nelson, Overland Literary Journal Online)

In a short concluding chapter Berry focuses on the positive legacies of AS and of Galbraiths work more generally. Scorned or ignored by most of his professional peers, his critique of the failures of orthodox economics still has great resonance, even more perhaps in the light of the lamentable failures of analysis and policy prescription that the most recent economic crisis has revealed. His attempt to delineate actually existing capitalism rather than an idealized model of the real world and many aspects of what he discovered about it have abiding significance (Michael Harloe, International Journal, Housing, Theory & Society)

Berry has written an accessible book for students of economics and the social sciences as well as for general readers interested in contemporary affairs and public policy ... Highly recommended. (CHOICE)

Mike Berry is Emeritus Professor at RMIT University, Melbourne Australia, where he was for many years Professor of Urban Studies and Public Policy. He is a frequent adviser to state and federal governments in Australia and has had visiting positions at a number of international institutions, including Rutgers University, Lund University, the University of Cambridge, and the University Sussex. He was Foundation Executive Director of the Australian Housing and Urban Research Institute, the largest and longest continuing collaborative research facility in Australian social and policy sciences. He has taught, and published widely, in the areas of housing, urban planning, environmental policy, and political economy. He is a director of one of Australia's largest non-profit housing associations. Part of the research for this book was carried out whilst he was a visiting fellow at the Rockefeller Foundation Center, Bellagio.

Descrizione libro Oxford University Press, 2021. Condizione: NEW. 9780199686506 This listing is a new book, a title currently in-print which we order directly and immediately from the publisher. Print on Demand title, produced to the highest standard, and there would be a delay in dispatch of around 10 working days. For all enquiries, please contact Herb Tandree Philosophy Books directly - customer service is our primary goal. Codice articolo HTANDREE01557886