Articoli correlati a Smuggler Nation: How Illicit Trade Made America 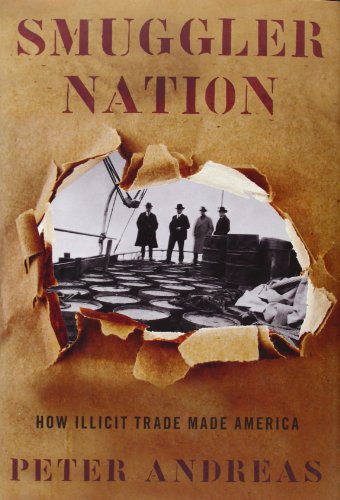 America is a smuggler nation. Our long history of illicit imports has ranged from West Indies molasses and Dutch gunpowder in the 18th century, to British industrial technologies and African slaves in the 19th century, to French condoms and Canadian booze in the early 20th century, to Mexican workers and Colombian cocaine in the modern era.

Providing a sweeping narrative history from colonial times to the present, Smuggler Nation is the first book to retell the story of America―and of its engagement with its neighbors and the rest of the world―as a series of highly contentious battles over clandestine commerce. As Peter Andreas demonstrates in this provocative and fascinating account, smuggling has played a pivotal and too often overlooked role in America's birth, westward expansion, and economic development, while anti-smuggling campaigns have dramatically enhanced the federal government's policing powers. The great irony, Andreas tells us, is that a country that was born and grew up through smuggling is today the world's leading anti-smuggling crusader.

In tracing America's long and often tortuous relationship with the murky underworld of smuggling, Andreas provides a much-needed antidote to today's hyperbolic depictions of out of control borders and growing global crime threats. Urgent calls by politicians and pundits to regain control of the nation's borders suffer from a severe case of historical amnesia, nostalgically implying that they were ever actually under control. This is pure mythology, says Andreas. For better and for worse, America's borders have always been highly porous.

Far from being a new and unprecedented danger to America, the illicit underside of globalization is actually an old American tradition. As Andreas shows, it goes back not just years but centuries. And its impact has been decidedly double-edged, not only subverting but also empowering America.

The most impressive features of this book are its readability and its engagingly broad definition of smuggling across time and place ... much scholarly research has gone into its writing. (Emma Hart, Sehepunkte)

Sweeping together all these various kinds of boundary defiance as documented previously by diverse historians including Doran Ben-Atar, Andrew Cohen and Erika Lee among others, Andreas manages to cover the whole history of the US, managing a case that borders have time and again provided the occasion for adding to the power and cost of the American government. (Eric Rauchway, The Times Literary Supplement)

readable ... its well-written chapters will complement courses on the history of capitalism or America in the world. Historians of all periods of American history will find something useful in its pages, especially those historians interested in trade's political economy. (Dael A. Norwood, Journal of American History)

Peter Andreas is Professor of Political Science and International Studies at the Watson Institute for International Studies at Brown University. He was previously an Academy Scholar at Harvard University, a Research Fellow at the Brookings Institution, and an SSRC-MacArthur Foundation Fellow on Peace and Security. Andreas has written numerous books, published widely in scholarly journals and policy magazines, presented Congressional testimony, written op-eds for major newspapers, and provided frequent media commentary.