Articoli correlati a Making the World Safe: The American Red Cross and a...

Making the World Safe: The American Red Cross and a Nation's Humanitarian Awakening 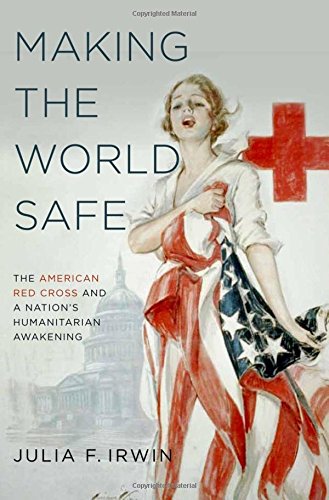 At the turn of the twentieth century, the United States was growing by fits and starts into its new role as a global power. Unlike European empires, it sought to distinguish itself as a new kind of power. Corporations and media outlets were spreading American brands, ideas, and commodities worldwide, increasing we would today call soft power. Meanwhile, American citizens and government officials grappled with their nation's rising prominence and debated how best to engage with the wider world. One of those ways was to use foreign aid to define the nation's new role and responsibilities with regards to the international community.

This first book narrates the early history of American foreign relief and assistance as a way of guiding the international community in peaceful cooperation and modernization towards greater stability and democracy. It tells the story of how the United States government came to realize the value of overseas aid as a tool of statecraft. A prime case in point is the American Red Cross, a quasi-private, quasi-state organization. Established in 1882, the ARC was a privately funded and staffed organization, primarily dependent on volunteer labor. However, it shared a special relationship with the U.S. government, formalized by Congressional charters, which made it the "official voluntary" aid association of the United States in times of war and natural disaster. Together, international-minded American progressives―a generation of American health professionals, social scientists, and public intellectuals―made the ARC into a vehicle for the global dissemination of their ideas about health, social welfare, and education. They urged their fellow citizens to reject their traditional attachments to isolationism and non-entanglement and to commit to "humanitarian internationalism." Their international activities included feeding, housing, and anti-epidemic projects in wartime France, Italy, Russia, and Serbia; the development of playgrounds, education initiatives, and child health clinics in postwar Poland and Czechoslovakia; correspondence programs to unite American children and their international peers; and the extension of all of these efforts to U.S. territories, sites where the conceptual lines between foreign and domestic blurred in the U.S. imagination.

This history calls attention to the ways that private organizations have served the diplomatic needs of the U.S. state, as well as been an institutional space for Americans who wanted to participate in international affairs in ways that deviated from official state agendas. By the mid-1920s, voluntary humanitarian interventionism had become the basis for a new set of American civic and political obligations to the world community.

[a] sharp, enlightening monograph ... Rather than a simple institutional history of a crucial actor Irwin has provided us a textured view of a critical agent in the evolution of humanitarianism in the United States that illuminates a diverse set of historical themes. (David Ekbladh, Diplomatic History)

1. Making the World Safe: The American Red Cross and a Nation's Humanitarian Awakening

2. Making the World Safe: The American Red Cross and a Nation's Humanitarian Awakening

Descrizione libro Condizione: NEW. 9780199766406 This listing is a new book, a title currently in-print which we order directly and immediately from the publisher. Print on Demand title, produced to the highest standard, and there would be a delay in dispatch of around 10 working days. For all enquiries, please contact Herb Tandree Philosophy Books directly - customer service is our primary goal. Codice articolo HTANDREE01548184