Articoli correlati a La Conquistadora: The Virgin Mary At War And Peace...

Remensnyder, Amy G La Conquistadora: The Virgin Mary At War And Peace In The Old And New Worlds

La Conquistadora: The Virgin Mary At War And Peace In The Old And New Worlds 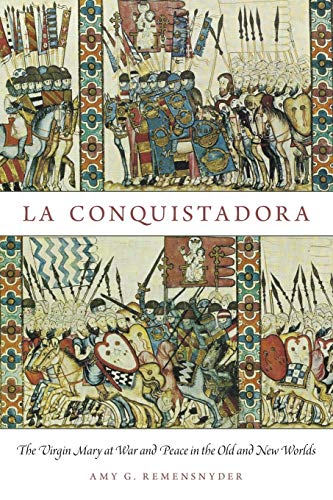 Through the Virgin Mary, Remensnyder examines the dynamics of Christian and non-Christian identity in the pre-modern Spanish world. Rather than focusing on the Virgin Mary, she instead uses the Virgin as a lens to understand how people established identities for themselves in the contexts of domination and devotion. The first half of the book looks at how Spanish Christians used the Virgin's martial functions to draw lines of demarcation between themselves and non-Christians both metaphoric differences such as doctrinal differences and religious polemic and physical ones of war. She could also embody religious borderlands, the places of hybrid and fluid spiritual identities. The second half of the book looks at how the Virgin served as a place of passage where religious lines could be crossed through conversion. The book considers Christian stories that depict Mary as a particularly effective agent in the conversion of Jews, Muslims, and natives of the Americas. The project also examines those Jews, Muslims, and Indians who converted to Christianity: the Virgin was a figure of power through whom they could express their new hybrid identities.

In this admirably comprehensive and multifaceted reconstruction of the development of the Hispanic perception of the Virgin Mary as Conqueror, Amy Remensnyder displays staggering range and insight. The book covers nearly a thousand years of Marian history, from the origins of the Reconquista in Spain through to the re-conquest of New Mexico after the Pueblo revolts in the seventeenth century. A work of impeccable scholarship and impressive erudition, narrated with gusto and elegance, it is a splendid achievement. (Fernando Cervantes, University of Bristol)

Sailing smoothly not only across the academic divides that separate medievalists from modernists, and historians from literary scholars and anthropologists, but also across fourteen centuries and a huge colonial empire, Amy Remensnyder reveals the intriguing and ever-changing figure of La Conquistadora. Mary lives in a continuous tension between the universal and the local, mother of us all incarnated in a bewildering variety of statues, sanctuaries, cults, and epithets. In this fascinating study, Remensnyder shows how, in the context of interreligious struggles, Mary, and her supposed role in these struggles, took on meaning for a wide variety of people. (John Tolan, author of Saint Francis and the Sultan)

The ways in which the Virgin Mary's martial associations undergirded Spanish aims of conquest, colonization, and conversion among non-Christians across portions of the medieval and early modern Spanish world are where Amy Remensnyder begins. But, sensitive to her data, they are rarely where she ends up. La Conquistadora will animate the study of Christianizing settings in the early modern Iberian world, and of quite other times and places as well. (Kenneth Mills, co-editor of Lexikon of the Hispanic Baroque)

detailed and complex ... This is a dense, complex, and tightly woven book about Mary and her relationship with the Spanish over several centuries ... This is a fascinating work, quite unlikely any other. (John F. Schwaller, H-LatAm)

Amy G. Remensnyder is Associate Professor of History, Brown University. She is the author of Remembering Kings Past: Monastic Foundation Legends in Medieval Southern France and co-editor of the forthcoming Why the Middle Ages Matter.

1. La Conquistadora : The Virgin Mary at War and Peace in the Old and New Worlds

3. La Conquistadora: The Virgin Mary at War and Peace in the Old and New Worlds (Paperback or Softback)

5. La Conquistadora: The Virgin Mary at War and Peace in the Old and New Worlds

6. La Conquistadora : The Virgin Mary at War and Peace in the Old and New Worlds

8. La Conquistadora: The Virgin Mary At War And Peace In The Old And New Worlds

9. La Conquistadora. The Virgin Mary at War and Peace in the Old and New Worlds.

Descrizione libro Condizione: New. Oxford University Press, 2014. 480p. Paperback. Remensnyder's volume has the merit of uniting the history of the Spanish Reconquest and the conquest of the new continent. It brings together literature and history in a refreshing way. Both these approaches are too infrequently followed. Lesley Twomey, University of Northumbria, Speculum 01/10/2019 |a 13/11/2019 (Publisher's information). Condition: New. 1. Codice articolo 42738