Articoli correlati a Advanced Programming in the Unix Environment

Advanced Programming in the Unix Environment 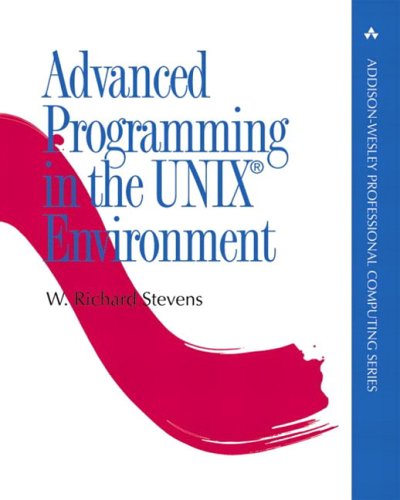 Bestselling UNIX author W. Richard Stevens offers application developers and system programmers his professional, experience-based guidance on using the system call interface with C. In the first half of the book, Stevens describes more than 200 system calls and functions with a brief example program following each description. Having provided the basics, Stevens moves on to chapter-long examples. The book is applicable to all major UNIX releases, especially System V Release 4-including Solaris 2-and 4.4 BSD, including 386 BSD.

We are deeply saddened to learn of the death of noted author W. Richard Stevens. His passing is obviously a tremendous loss for the technical community, but it is a personal one for us as well. Rich was both a gifted colleague and a valued friend who will be greatly missed. We extend our sympathies to his family.

Obituary from the Arizona Daily Star:

STEVENS, W. Richard, noted author of computer books died on September 1. He is best known for his "UNIX Network Programming" series (1990, 1998, 1999), "Advanced Programming in the UNIX Environment" (1992), and "TCP/IP Illustrated" series (1994, 1995, 1996). Richard was born in 1951 in Luanshya, Northern Rhodesia (now Zambia), where his father worked for the copper industry. The family moved to Salt Lake City, Hurley, New Mexico, Washington, DC and Phalaborwa, South Africa. Richard attended Fishburne Military School in Waynesboro, Virginia. He received a B.SC. in Aerospace Engineering from the University of Michigan in 1973, and an M.S. (1978) and Ph.D. (1982) in Systems Engineering from the University of Arizona. He moved to Tucson in 1975 and from then until 1982 he was employed at Kitt Peak National Observatory as a computer programmer. From 1982 until 1990 he was Vice President of Computing Services at Health Systems International in New Haven, CT, moving back to Tucson in 1990. Here he pursued his career as an author and consultant. He was also an avid pilot and a part-time flight instructor during the 1970's.

He is survived by his loving wife of 20 years, Sally Hodges Stevens; three wonderful children, Bill, Ellen and David; sister, Claire Stevens of Las Vegas, NV; brother, Bob and wife Linda Stevens of Dallas, TX; nieces, Laura, Sarah, Collette, Christy; and nephew, Brad. He is predeceased by his parents, Royale J. Stevens (1915-1984); and Helen Patterson Stevens (1916-1997). Helen lived in Tucson from 1991-1997, and Royale lived here in the early 1930's attending Tucson High School while his father was treated for TB at the Desert Sanitorium (now TMC). The family asks that in lieu of flowers, donations be made in Richard's name to Habitat for Humanity, 2950 E. 22nd Street, Tucson, AZ 85713. A memorial service for Richard will be held at St. Phillip's in the Hills Episcopal Church on Tuesday, September 7th at 12:00 noon. Following the service there will be a reception in the Murphy Gallery of the Church. Please wear colorful clothing to the service; Richard loved colors.

W. Richard Stevens was an acknowledged UNIX and networking expert and the highly-respected author of several books. He was also a sought-after instructor and consultant.

If you are an experienced C programmer with a working knowledge of UNIX, you cannot afford to be without this up-to-date tutorial on the system call interface and the most important functions found in the ANSI C library. Rich Stevens describes more than 200 system calls and functions; since he believes the best way to learn code is to read code, a brief example accompanies each description.

Building upon information presented in the first 15 chapters, the author offers chapter-long examples teaching you how to create a database library, a PostScript printer driver, a modem dialer, and a program that runs other programs under a pseudo terminal. To make your analysis and understanding of this code even easier, and to allow you to modify it, all of the code in the book is available via UUNET.

A 20-page appendix provides detailed function prototypes for all the UNIX, POSIX, and ANSI C functions that are described in the book, and lists the page on which each prototype function is described in detail. Additional tables throughout the text and a thorough index make Advanced Programming in the UNIX Environment an invaluable reference tool that all UNIX programmers - beginners to experts - will want on their bookshelves.

Advanced Programming in the UNIX Environment is applicable to all major UNIX releases, especially System V Release 4 and the latest release of 4.3BSD, including 386BSD. These real-world implementations allow you to more clearly understand the status of the current and future standards, including IEEE POSIX and XPG3.

Advanced Programming in the Unix Environment