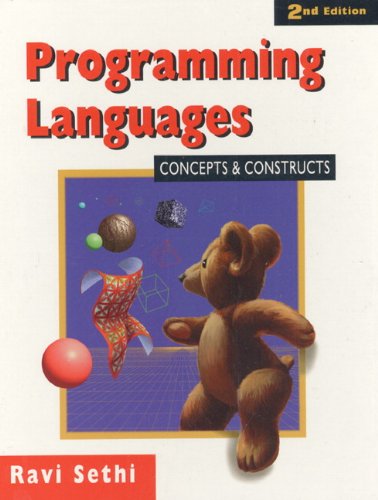 Programming Languages: Concepts and Constructs, Second Edition retains the "character" of the original, emphasizing concepts and how they work together. This classic book has been thoroughly revised to provide readable coverage of the major programming paradigms. Dr. Sethi's treatment of the core concepts of imperative programming in languages like Pascal and C flows smoothly into object-oriented programming in C++ and Smalltalk. The charm of functional languages is illustrated by programs in standard ML and the Scheme dialect of Lisp. Logic programming is introduced using Prolog. Novices, who have been introduced to programming in some language, will learn from this book how related concepts work together while designers and implementers willp be exposed to the major programming paradigms. Example programs from the book are available as source code. These are available by anonymous ftp at ftp://ftp.aw.com/cseng/authors/sethi/pl2e. 0201590654B04062001

Ravi Sethi, director of Computing Science Research, has been at AT&T Bell Laboratories in Murray Hill, New Jersey since 1976. He has held teaching positions at Pennsylvania State university and the University of Arizona, and has taught at Princeton University and Rutgers. Dr. Sethi is co-author of the "dragon book", Compilers: Principles, Techniques and Tools and has written numerous articles. His books have been translated in Japanese, German, French, Italian, Spanish, and Korean.