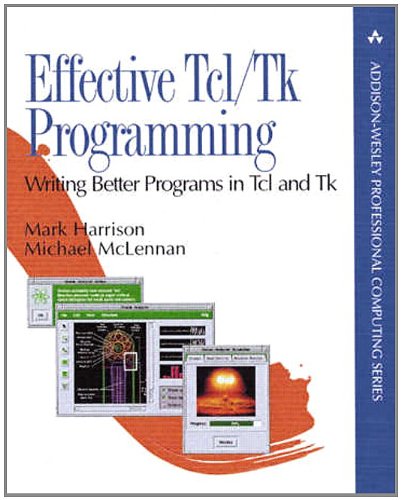 The Tcl scripting language and the Tk toolkit together create a programming environment for creating graphical user interfaces. There is increasing interest in using Tcl/Tk in university classes in order to free students to concentrate on algorithms, etc., rather than spending lots of time on implementation in a lower level language. Anyone who has read Ousterhout's definitive description of the language and wants to learn more about Tcl/Tk will find this book the perfect next step. Based on the authors' extensive experience building and deploying mission-critical Tcl software and teaching others to do the same, this book offers a wealth of practical information on how to exploit the full potential of this remarkable programming environment. Using real programs as examples, the book demonstrates Tcl and Tk concepts. It shows readers how to build Tcl applications effectively and efficiently through plenty of real-world advice, offers valuable design strategies, and points out pitfalls that readers should avoid. It clarifies the more confusing aspects of Tcl/Tk and thoroughly explains Tcl features that have no counterpart in conventional programming languages.

Mark Harrison has been programming in Tcl ever since he heard John Ousterhout speak at the 1990 Usenix conference.* He currently works in the telecommunications industry for DSC Communications Corporation as a senior system architect, where he is Chief Tcl Evangelist.* In addition, he is enrolled in the computer science department at the University of Texas at Dallas.

Michael J. McLennan is a Distinguished Member of Technical Staff at Bell Labs Innovations for Lucent Technologies, where he develops software for Computer-Aided Design (CAD). He has been a Tcl/Tk enthusiast since 1992, writing many extensions and applications. He developed the incr Tcl extension, which adds object-oriented facilities to Tcl/Tk. He has also created several Tcl/Tk training courses.

You need a graphical user interface, and it needs to run on multiple platforms. You don't have much time, and you're not a wizard with X/Motif, the Win32 GUI, or the Mac GUI. The project seems impossible, but with Tcl/Tk it's simple and fun.

The Tcl scripting language and the Tk toolkit create a powerful programming environment for building graphical user interfaces. With two lines of code you can create a simple button; with two hundred lines of code, a desktop calculator; and with a thousand lines of code, an industrial-strength groupware calendar and appointment minder. Your applications run on all of the major platforms: UNIX, Windows 95/NT, and Macintosh. You can even embed your programs in a Web page to make them available online.

Mark Harrison and Michael McLennan, two noted Tcl/Tk experts, combine their extensive experience in this practical programming guide. It is ideal for developers who are acquainted with the basics of Tcl/Tk and are now moving on to build real applications.

Effective Tcl/Tk Programming shows you how to build Tcl/Tk applications effectively and efficiently through plenty of real-world advice. It clarifies some of the more powerful aspects of Tcl/Tk, such as the packer, the canvas widget, and binding tags. The authors describe valuable design strategies and coding techniques that will make your Tcl/Tk projects successful. You will learn how to:

Throughout the book, the authors develop numerous applications and a library of reusable components. Learn from their approach, follow their strategies, and steal their code for your own applications! But don't bother retyping all of the examples.